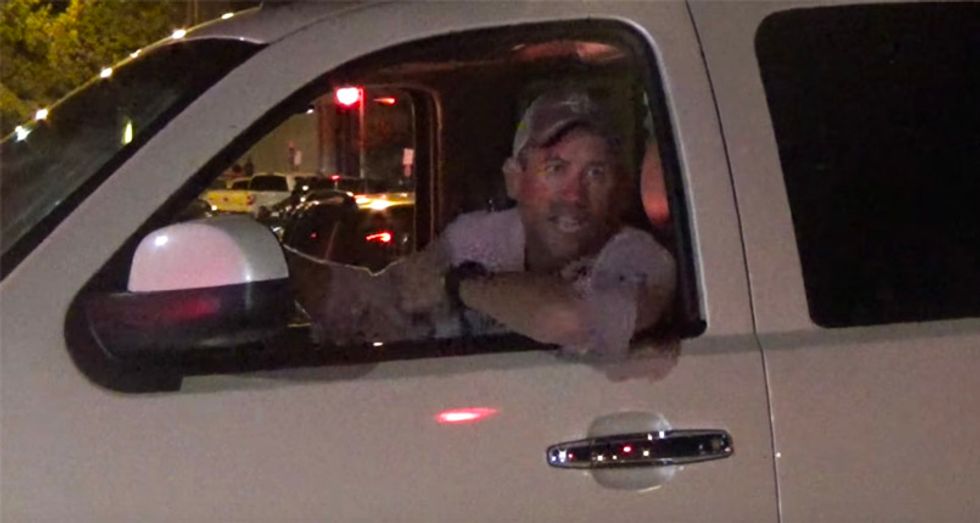 In video uploaded to YouTube, a white man driving a large SUV plowed through a group of Black Lives Matter protestors only moments after talking to a police officer.

The video, taken by guerilla filmmaker "Rebelutionary_Z" begins with a shot of a crowd in the street in Kirkwood, a suburb of St. Louis, on Thursday night, protesting over the trial of former St. Louis police officer Jason Stockley, who was later acquitted on charges of intentionally killing Anthony Lamar Smith.

At the beginning of the video, the SUV can be seen hurtling toward the protestors in the street, with the horn blasting and people frantically scrambling to get out of the way. After breaking through, the car stops after being hit by thrown items, before the driver speeds off -- with no police in pursuit.

The Riverfront Times reports that there were no injuries.

As part of the video, the driver is seen talking with a police officer just minutes before the incident replying, “Nah, I want in this” to an unheard question from the cop.

In a conversation with one of the protestors, the driver asked, "What are we protesting tonight?"

After it was pointed out that it was about a black man being killed by white police officer, the cop walked up and briefly spoke with the driver.

"You're disrupting other people's lives," the driver explained to the protestor before adding, "They need to go."

"That's the point of a protest," he is told, to which he angrily replied. "I live in Meacham Park! I'm a white male living in a black community, suck my d*ck. I am a white guy!"

That leads to a conversation over whether he "looks over" his shoulder when a policeman is behind him, with the driver stating "I fear going home from everybody."

The protestor tells him, "That ain't the same and that's why people are out here."

Watch the video below, uploaded to YouTube by "Rebelutionary_Z":