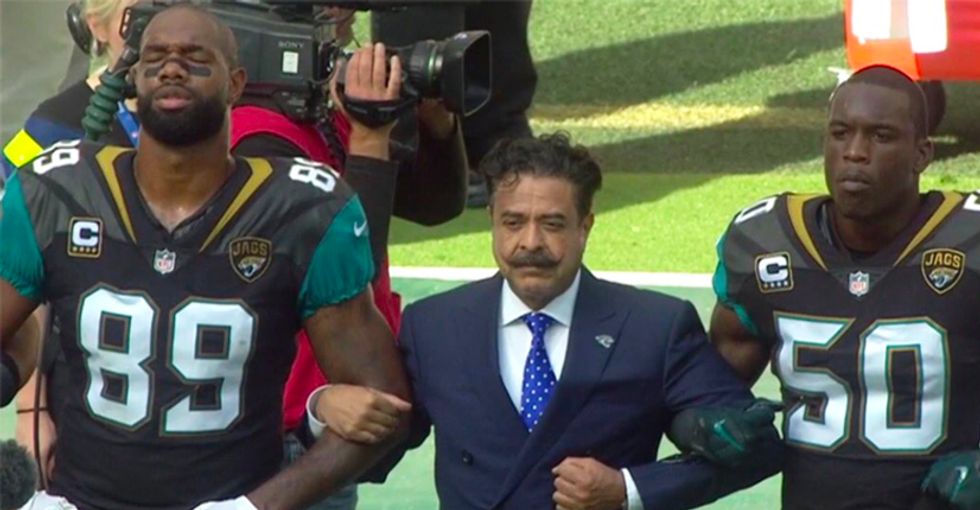 Getting a jump on NFL games in the United States, players, coaches and one owner either took a knee or locked arms at a game being played at London's Wembley Stadium early Sunday morning.

The Baltimore Ravens and the Jacksonville Jaguars are playing their game overseas on Sunday and, as the national anthem was played, more players than usual dropped to one knee or linked arms with coaches in a severe rebuke to President Donald Trump who set off a firestorm Friday night after attacking ex-NFL quarterback Colin Kaepernick.

In photos posted to Twitter, Jaguars owner Shahid Khan was also seen locking arms on the sideline with players.

You can see some of the photos below as well as CNN coverage:

Some took knees some didn't in London but the players & coaches interlocked arms & are clearly united against Trump… https://t.co/dqMrrMSwMz
— Scott Dworkin (@Scott Dworkin) 1506260198.0

Ravens and Jaguars players locked arms while others knelt for the national anthem prior to the game in London.… https://t.co/EYabL2K0Vl
— SportsCenter (@SportsCenter) 1506261708.0