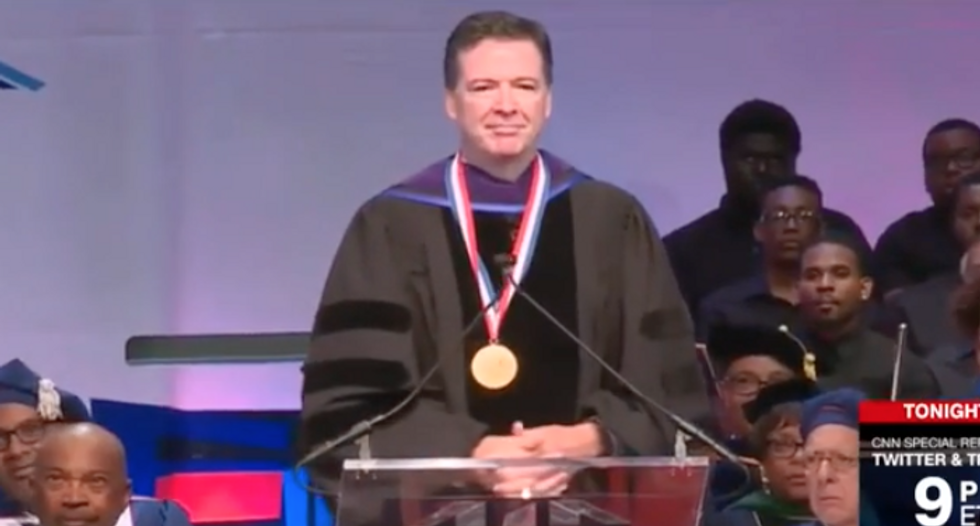 Protestors at Howard University shouted down former FBI Director James Comey as he delivered a convocation address at the historically black college.

The students gave the Black Power salute as they shouted “No Justice No Peace!” and “Get out James Comey, get out our home” during the address. They also chanted, “I love being black/I love the color of my skin/This is the skin that I’m in.”

At one point during the protest, Comey implored the students to stop speaking over him. “I hope you’ll listen to what I have to say,” Comey said. “I listened to you for five minutes.”

As FBI director, Comey was vocal about his belief in the so-called Ferguson effect, or the idea that anti-police sentiments following the shooting of Michael Brown in Ferguson, MO, led to an increase in violent crime.

In a 2015 speech at an FBI field office in Missouri, Comey argued “hundreds of police officers and chiefs” have told him the events that transpired in Ferguson made them less likely to do their jobs. Comey’s anecdotal evidence is not supported by data; a June 2015 crime report found no "credible and comprehensive evidence” behind the Ferguson effect.

Prior to his speech at Howard, Comey expressed his desire “to have a rich dialogue” with the students at Howard.

“Howard has a longstanding history of being a vibrant academic community and the perfect place to have rich dialogue on many of the most pressing issues we face today,” Comey in a statement. “I look forward to contributing to this remarkable institution and engaging students and faculty alike.”

Watch video below, via CNN: