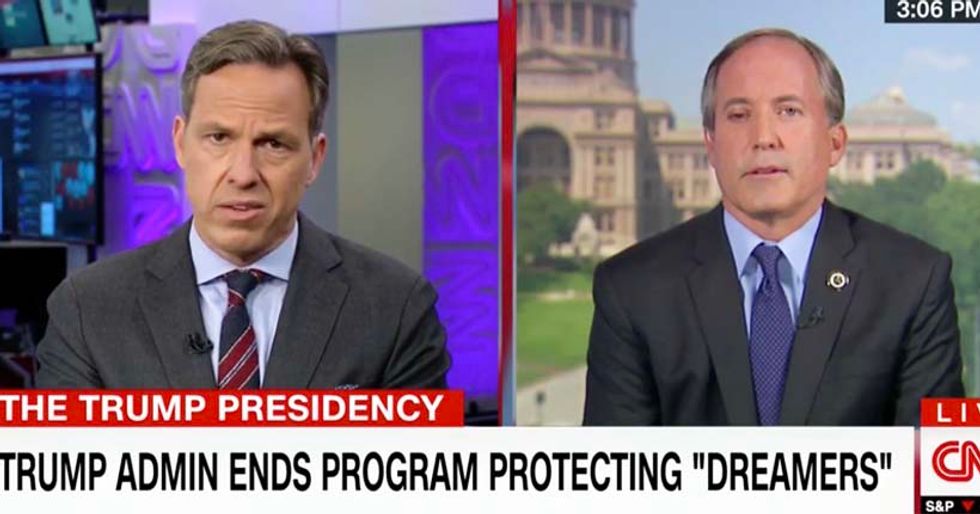 Appearing on CNN's "The Lead," the Republican Attorney General of Texas refused to comment on the wisdom of deporting a "Dreamer" paramedic who has been hailed as an American hero for saving lives after Hurricane Harvey hit Texas.

"What do you think immigration officials in this country should do with the nearly 800,000 Dreamers who thus far have been allowed to stay on this two-year renewal basis as long as they meet appropriate qualifications, don't have any felony convictions, et cetera?" CNN host Jake Tapper asked Texas AG Ken Paxton.

"Look, my job is to enforce the Constitution, defend our Constitution. It is up to Congress to make decisions about what the right policy is," Paxton argued.

"But it's not a theoretical question for you, especially being the Attorney General of Texas," Tapper reminded. "As you know, for example, there's DACA recipient in Texas, Jesus Contreras, he's a paramedic and he spent six days rescuing victims of Hurricane Harvey in his and your home state of Texas."

"He's a Dreamer, he could potentially face deportation in this nation he's called home since the age of six. What should happen to Jesus?" Tapper asked.

"So for the next six months, there is going to be basically no enforcement on any of this until March of 2018," AG Paxton argued. "After that it comes down to a matter of priorities for the administration, but hopefully by then Congress will address the issue and resolve some of the concerns that the Americans might have about this particular issue."

"But you don't have an opinion one way or the other?" Tapper wondered aloud.

"I don't worry about policy," Paxton argued. "That's up to the policymakers and Congress.

"It's one of the most disgusting, saddening messages that we've ever heard," Contreras said a video from Miami.

"I've had very little sleep... I've been exhausted. Nonetheless, I understand that I am here for a purpose," he said. "God has put me here to speak for the hundreds of thousands of us that are dealing with this right now."

In a separate case, Attorney General Paxton his been charged with two first-degree felony charges for securities fraud. Paxton is facing a maximum 99-year prison term. Jury selection for the AG's trial is scheduled to start on Monday, with the trail expected to begin the following day.