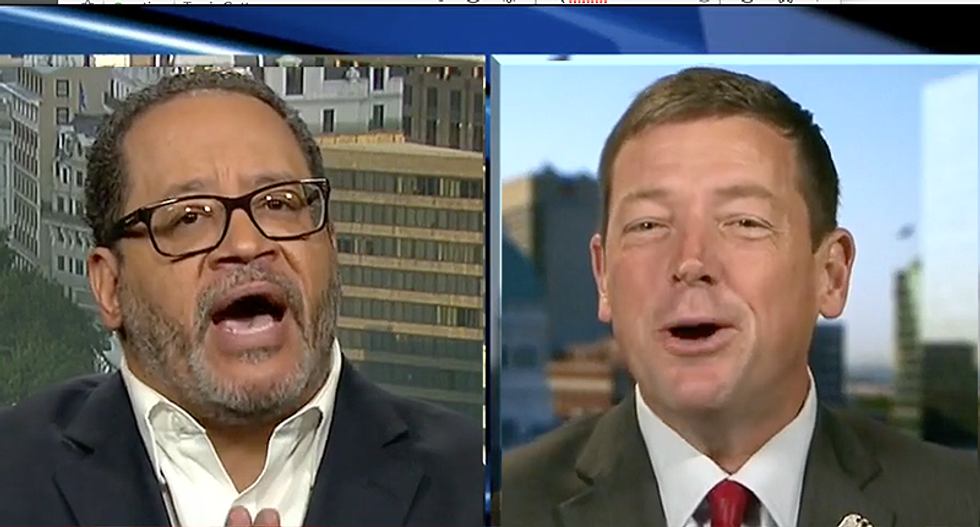 Martin attacked the NFL players taking a knee as the "1 percent," ignoring that many of them came from very little and managed to excel based on hard work not corporate welfare. Dyson took immediate offense and accused President Donald Trump of using the bully pulpit to support his racism.

"It can be about everything [Martin] said but it's also about race," said Dyson about the protests. "The reality is that in this country the mistreatment of African-American people that concerned Colin Kaepernick from the very beginning."

Martin could be overheard refusing Dyson's claim that it was about race, despite the fact that Kaepernick's protest began that way.

"Even beyond Colin Kaepernick, it's bigger than him," said Dyson. "Whether or not he has flaws or virtues is the central point he's making. Many of the leaders who led us, Thomas Jefferson owned slaves, yet wrote the beautiful Declaration of Independence. We can't ask for perfect people to make perfect arguments. What we can do is ask them to is be held accountable for the rights we have. The president of the United States of America, bully pulpit comes from Teddy Roosevelt, that assumes a predicate of high intelligence in defense of moral principles that spread to the rest of the nation. The reality is this, he's a bully in the pulpit trying to rain down the fury of his irrelevant concepts of American Democracy, and he's failed to understand the necessity of dealing with it."

He went on to attack Martin for saying that people agree with Trump, but said that people once disagreed with Dr. Martin Luther King, Jr. -- but now they celebrate his birthday every year. Times change and people change with it, according to Dyson.

"When black people are murdered the flag is disrespected," Dyson countered.

"Chris, here is what's interesting, instead of having a debate on something else right now we're talking about whether African-Americans have been abused by the police," Martin said, seeming to forget that this was how the entire issue was begun by Kaepernick. "Isn't there some way that you should say, 'Hey, wow, Trump has led us into a national conversation' and instead of whacking and banging on every American that disagrees with the protest method say 'Hey, guys, he's not full of hate and non intelligent,' which is what the doctor said. Instead say here are what the facts are on brutality and other things."

Cuomo then explained to Martin, "it's not about us," referring back to the African-Americans using the protest to talk about police brutality. He then read off Trump's tweets using phrases like "they booed loudly last night," and "great anger." He then read off Trump's tweet saying that it was great progress because the Dallas Cowboys stood up for the anthem and declared it a victory on his part.

"Does he say progress is being made? Progress on community interactions between black and white? He doesn't elevate a damn thing, Ed! He traffics in the division!" Cuomo shouted.

The panel then devolved into a shouting match from there. Watch below:

Panel goes off the rails when conservative... by sarahburris