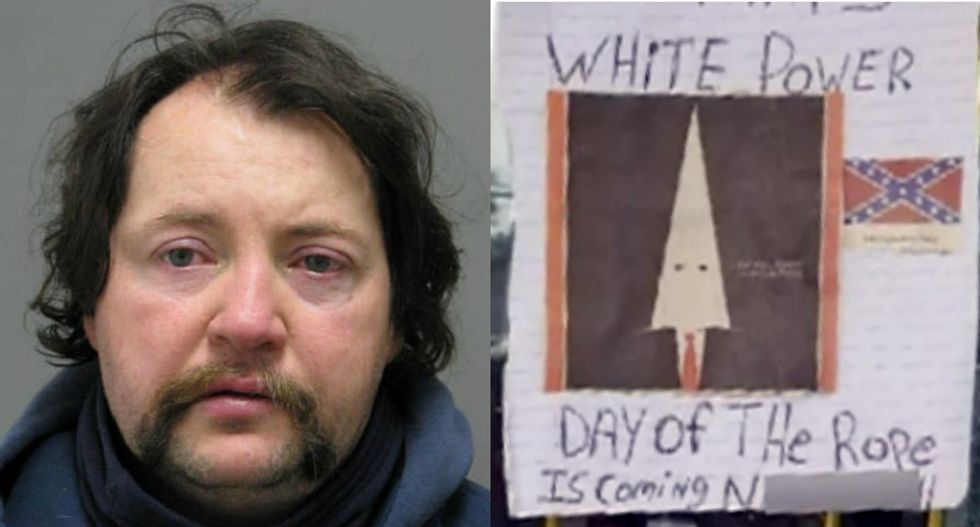 Michael Todd Birkl (left) and the threatening note he left on the door of a black church in Virginia (right). Images via Prince William County Police and Twitter.

Michael Todd Birkl -- a man who’s been charged for leaving a KKK-referencing note on the door of a predominantly black church in Virginia weeks after Charlottesville -- has a long history of failed crimes dating back more than 20 years.

According to Washington, D.C.'s WJLA news station, Birkl was arrested for leaving a note on the door of a church in Dumfries, Virginia last month that read "Now THATS WHiTE POWER, DAY of THe Rope IS Coming [sic]." Along with the epithet were clippings from KKK pamphlets, a photo of a Confederate flag and a cutout from a TIME magazine cover illustration of President Donald Trump in a white klan hood.

His racist threats towards the Dumfries church was not his first foray into white supremacist violence.

In 1994, Birkl, who was 26 and living in Pennsylvania, held a woman hostage for six-and-a-half hours. According to the Baltimore Sun, he did so because he is a "white supremacist" and saw it as his only way to spread his message. While police attempted to negotiate with him, he called a local TV station and told them "the end of the world is coming." At the time, he claimed to have cancer.

Birkl was also arrested in 2015 in Dumfries for a foiled carjacking where he stabbed the man he was attempting to rob. He then tried to flee on foot, but officers caught up to him "a short distance away."