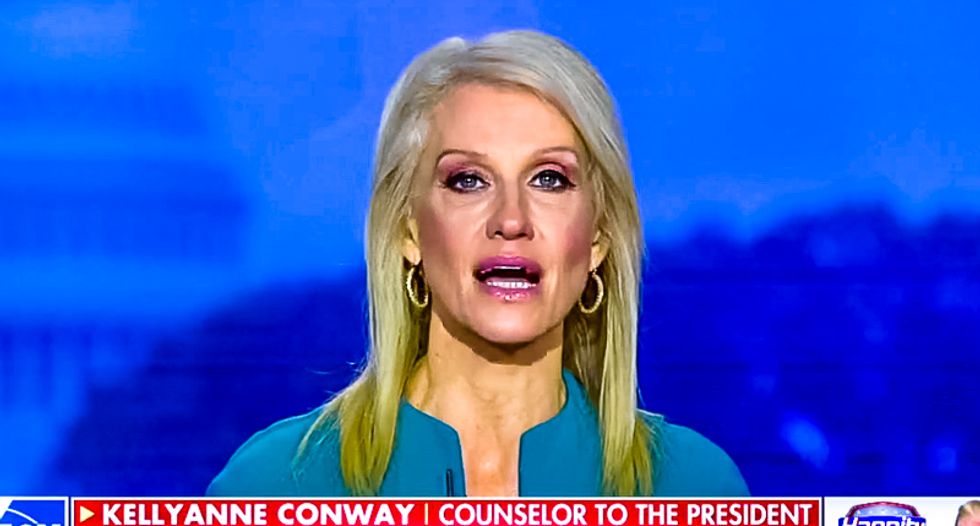 The White House has launched a full court press to push back against Friday's bombshell news that Special Counsel Robert Mueller has filed the first charges in his multi-pronged investigation into President Donald Trump and his connections to Russia.

Politico said on Saturday that while some aides are going on the offensive against Mueller and the investigation itself, others are trying to pretend that nothing is the matter whatsoever.

"This has been a tremendously successful week," said Kellyanne Conway in a text message on Saturday. “Budget passed, which is a critical step toward tax cuts; GDP again at 3%; ‘Russia collusion’ boomeranged toward the Democrats; the President and the First Lady delivered a major policy speech and nationwide call to action on opioids and drug demand; POTUS is preparing for his first trip as President to Asia.”

The fact that the indictments are sealed has sent shock waves through the administration and the uncertainty of what's to come on Monday has left some advisers "livid" and "focusing their rage on how the information leaked and on a forever target: Hillary Clinton," said Politico's Annie Karni.

“It is unusual for prosecutors to file indictments under seal and then have it leak out,” said Mark Corallo, waxing indignant. “This was an ill-advised leak of information."

Corallo -- who was jettisoned from the White House legal team for his campaign of "character assassination" against Mueller -- added, “I'm disgusted by the tactics of the prosecutors to leak the information.”

The White House, as CNN's Jim Acosta noted, has yet to provide any evidence aside from innuendo and a poorly-sourced article in conservative magazine The Federalist.

Sebastian Gorka -- former Breitbart.com columnist turned fired White House aide -- attacked the Steele dossier, dismissing it not on its contents, but its origins.

“It’s very peculiar that just as we’re finding out about Hillary’s responsibility with the dodgy dossier," he said, "now’s the time that we can expect some action out of the special prosecutor’s office. It’s far too suspicious.”

The president spent Saturday golfing at his resort in Virginia.