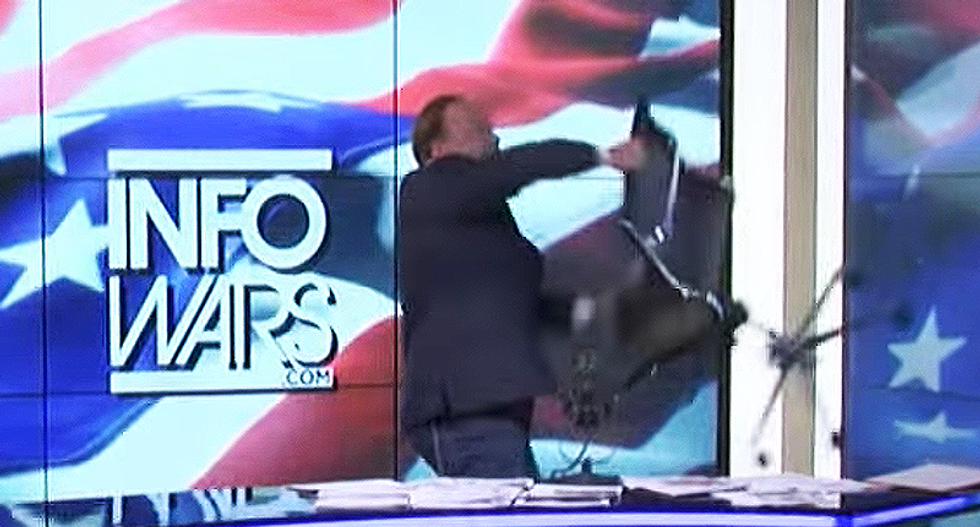 Alex Jones' latest installment of his 'InfoWars' conspiracy and commentary, the host seemed to have been possessed with rage over a "mostly false" story about a drag queen in a demon outfit reading to children.

The fusillade of Jones outrage accused liberals of attempting to sexualize children with volunteers reading books at public libraries, according to Right Wing Watch. Jones became so unhinged he accused drag queens of being pedophiles who "have their way with children" in "space alien" and "demon goblin" outfits, referring to the costumes drag queens wear. He also included something about baby giraffes.

“Imagine if someone in a demon outfit, showed up next to a baby giraffe and said, ‘Hi, I’m a demon. Be inclusive. Don’t be mean to me. Let me wear demon horns and come up and look like a complete alien from another planet,’” the torrent of rage continued.

“They dress up like space aliens all over the United States of America and all over the world,” Jones continued. “In horrible demon psychopath outfits that make Pennywise look beautiful. And they show up and they have their way with children, in demon outfits. I mean, if you’ve got men that look like 400-pound goblin demons with your children, there’s nothing you won’t put up with.”

The Long Beach public library has a Drag Queen Story Hour for any parents interested in bringing their children. It's not a mandatory activity, nor were there demonic teachings involved, according to Snopes.

“There isn’t a species on the planet that would let something that looks like a space alien get up close to its kids,” Jones shouted, ignoring the characters dressed up at theme parks. “But only in America does it happen and I’m sick of it.”

“I’m tired of it right now! I can’t handle it anymore!" Jones screamed.

He then stood and picked up his chair, presumably throwing it into his camera operators and staff, however, the video quickly cuts to his logo.

Jones lost primary custody of his children in a very public court battle in which his online persona was used as an example that he was unfit to be a parent.

You can watch the ragegasm below: