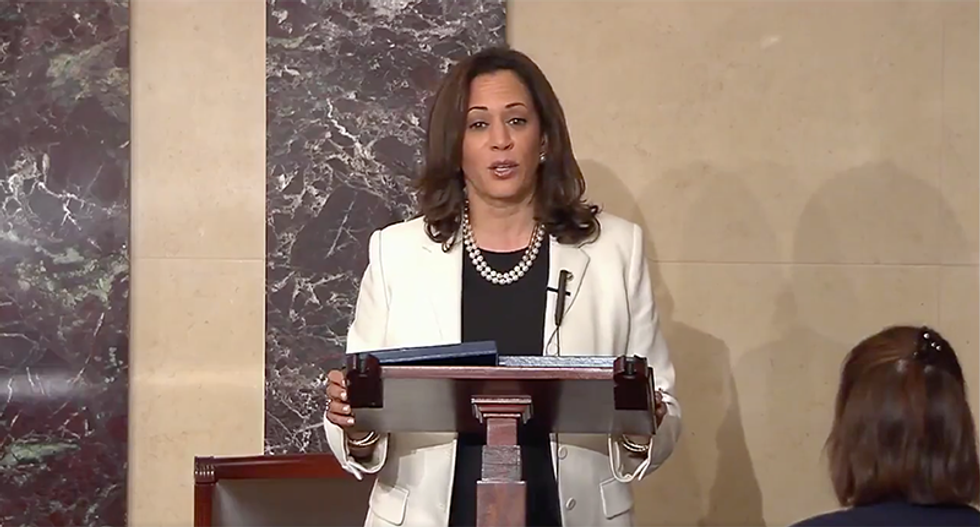 On Sunday, California Democratic Sen. Kamala Harris defended pro athletes who protest police brutality by taking the knee during the national anthem, saying they should not be "threatened or bullied" for expressing their beliefs.

The Hill said that Harris made the remarks in an appearance at Atlanta's First Congregational Church.

"Let’s speak the truth that when Americans demand recognition that their lives matter, or kneel to call attention to injustice, that that is an expression of free speech, protected by our Constitution, and they should not be threatened or bullied," Harris said.

"When we sing 'The Star-Spangled Banner,' we rightly think about the brave men and women from all backgrounds who proudly defend the freedom of those they may never meet and people who will never know their names. When we sing 'The Star-Spangled Banner,' we also think about those marching in the streets who demand that the ideals of that flag represent them too," she said to the assembled congregation.

President Donald Trump has been voluble in his displeasure at seeing athletes protest the deaths of black Americans by police brutality while he and other Americans just want to watch sports and be entertained.

However, the president's attacks on athletes like Colin Kaepernick have only spurred other athletes, managers and coaches to join in the protests or express solidarity with the players.