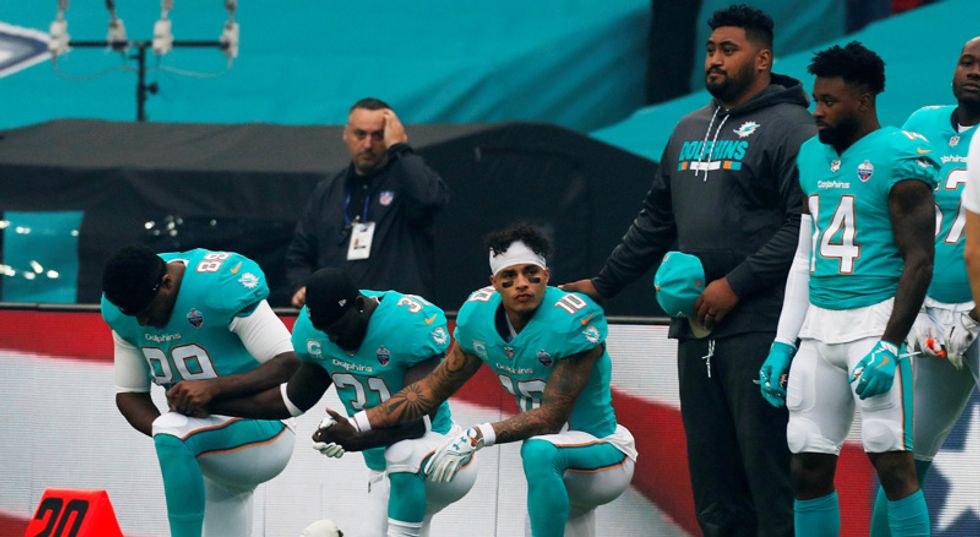 Some National Football League players knelt again on Sunday when the U.S. national anthem was played before a game in London, defying U.S. President Donald Trump's renewed call to end their protest over racial injustice.

All of the other uniformed Dolphins players and their opponents, the New Orleans Saints, were standing, many with their right hands over their chests.

The three players who had knelt stood for the British anthem "God Save the Queen," which was also performed before the game.

On the eve of Sunday's 14 NFL games, Trump on Saturday renewed his sharp criticism of players who have refused to stand during the pre-game ceremony.

"Very important that NFL players STAND tomorrow, and always, for the playing of our National Anthem," Trump posted on Twitter. "Respect our Flag and our Country!"

On Sept. 22, he had touched off a national controversy that has enveloped the country's most popular sports league. [nL2N1M40CQ]

Some African-American players adopted the symbolic gesture of kneeling during the anthem over the last year to protest against racial disparities in the U.S. criminal justice system.

Outside Wembley Stadium, not all British fans supported the players' protests.

“I think everyone has the right to protest, but I think you have to choose your stage wisely," said Laura Williams, who works in healthcare. "I think you risk upsetting more people than it’s worth."

However, Mark Dodson, an engineer, said the protests were "absolutely a global initiative" and "a sign of solidarity between different races, different backgrounds, different everything basically, which is great to see."

On Tuesday, Trump called on the NFL to ban players from kneeling in protest at games while the national anthem is played.

"The NFL has all sorts of rules and regulations," he wrote. "The only way out for them is to set a rule that you can't kneel during our National Anthem!"

And on Thursday, Trump continued the crusade, drawing a rebuke from the NFL after he said football team owners feared their players.

The Republican president told "Fox & Friends" that he was friends with many NFL team owners, and they were "in a box" over how to handle the kneeling protests.

"They say: 'We are in a situation where we have to do something,'" Trump said. "I think they're afraid of their players, you want to know the truth. And I think it's disgraceful." He did not elaborate.

The NFL rejected the president's remarks as not factual.

A week ago, coaches, support staff and even some owners joined team members in silent support by kneeling, linking arms or staying off the field during the anthem.

The players' protests began last year when Colin Kaepernick, a San Francisco 49ers quarterback, protested police treatment of African-Americans by not standing during the anthem.

The protests culminated a week ago when scores of players, following calls by the president to fire protesting athletes, sat or knelt as the anthem was played.