'A lie is a lie, in the morning and at night': CNN panel smacks down Jack Kingston as he tries to defend Trump 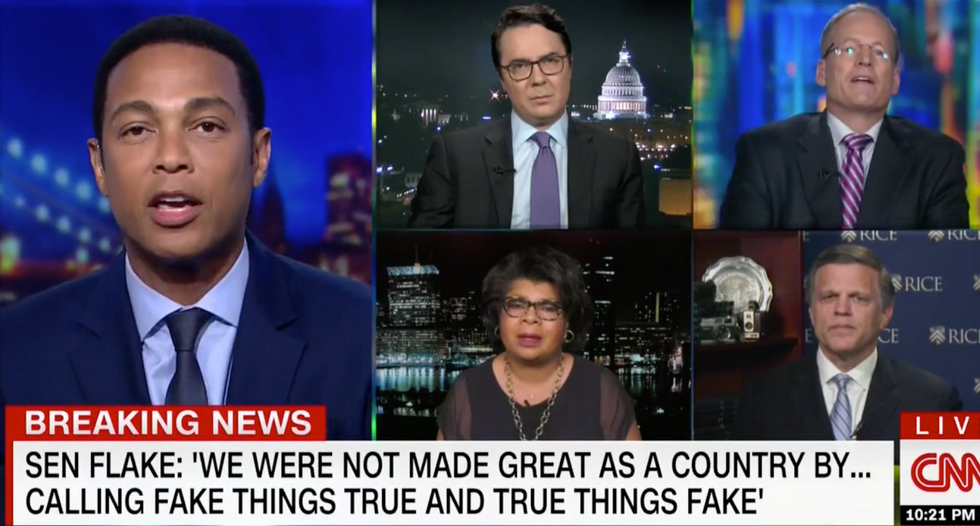 “You have to call it what it is, a lie is a lie, in the morning and at night — all day long,” Lemon told the panel.

The New Yorker’s Ryan Lizza, when asked about Trump’s tendency to fudge the facts, noted, “Trump is not so much a liar but he is a BS’er.”

“He throws stuff against the wall and throws out arguments and information that may be true, may not be true, it's whatever he can do to get through that moment, that situation,” Lizza explained. “And his understanding of the line between what is fact and fiction is not very clear.”

Kingston tired to argue “the American perception is that politicians lie,” and Trump is simply in-step with that perception.

“You’re defining everything down because people have a cynical negative view of politicians,” Lizza explained. “We should just go with that and allow the worst traits and the worst instincts to prevail?”

After some back and forth, Lizza asked Kingston if he has children.

“Yes, I have kids,” Kingston replied.

“When they were little, did they ever tell a lie?” Pizza asked. “When they told a lie, did you say, ‘Don't worry, son, it's no big deal?’ Or did you actually say to them why they shouldn't lie?”

“Jack, it sounds like you're condoning bad behavior,” Lemon added.

Appearing on CNN's "New Day" on Monday morning, NYU School of Law professor Ryan Goodman laughed at the prospect of Donald Trump's lawyers going into court and defending their client of election tampering charges by claiming he believed he won.

Speaking with hosts Brianna Keilar and John Berman, Goodman -- who co-authored a piece in the Washington Post on the same subject -- explained that the former president's lawyers would get laughed out of court if they attempted that defense.