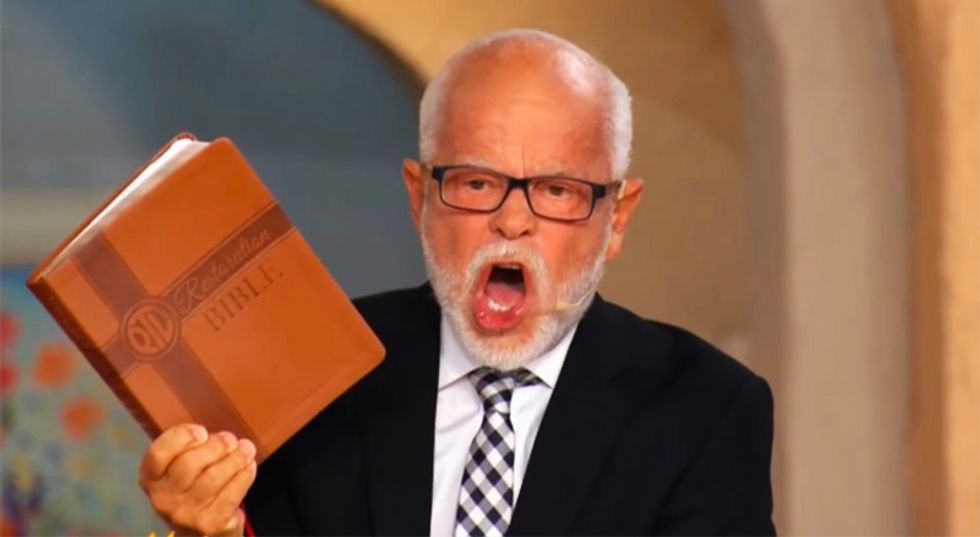 In video captured by Right Wing Watch, disgraced evangelist Jim Bakker raged at his critics saying, they will face the wrath of God for mocking his End Time warnings and making fun of him throughout his checkered career.

Not mentioning his time in the wilderness, after he spent time in prison after bilking his followers out of $158 million, Bakker boasted that he has made many predictions -- including 9/11 -- that have come true, and that he is not being treated like the prophet he is.

"When God says something to you, you don’t always know the exact time it’s going to happen," Bakker thundered. "[So] stop beating up the prophets because God says, ‘Woe unto you when you beat up on the prophets.'”

Bakker then threatened damnation on those who have ridiculed him over the years.

“If you don’t want to hear it, just shut me off,” Bakker said. “Especially you folks that monitor me every day to try to destroy me. Just go away. You don’t have to be there, you don’t have to hear it. But one day, you’re going to shake your fist in God’s face and you’re going to say, ‘God, why didn’t you warn me?’ And He’s going say, ‘You sat there and you made fun of Jim Bakker all those years. I warned you but you didn’t listen.'”

Watch the video below via Right Wing Watch:

The Senators called for the far-right leader to be barred indefinitely from YouTube, Twitter, Facebook and Instagram after he cited non-existent "official reports" from the British government allegedly finding fully vaccinated people are developing AIDS "much faster than expected."

Breaking news about former Trump aides voluntarily cooperating with the House Select Committee to Investigate the January 6th Attack on the U.S. Capitol could influence voters during the midterm elections, a CNN political analyst explained on Tuesday.

For decades NASA, SETI and other researchers have found planets all over the Milky Way Galaxy, but according to a new report, NASA may have found the first outside of our home galaxy.

The Daily Beast cited a NASA report saying that 28 million light-years away in the Whirlpool Galaxy, sitting next to a black hole, is the first discovered extra-galactic planet.