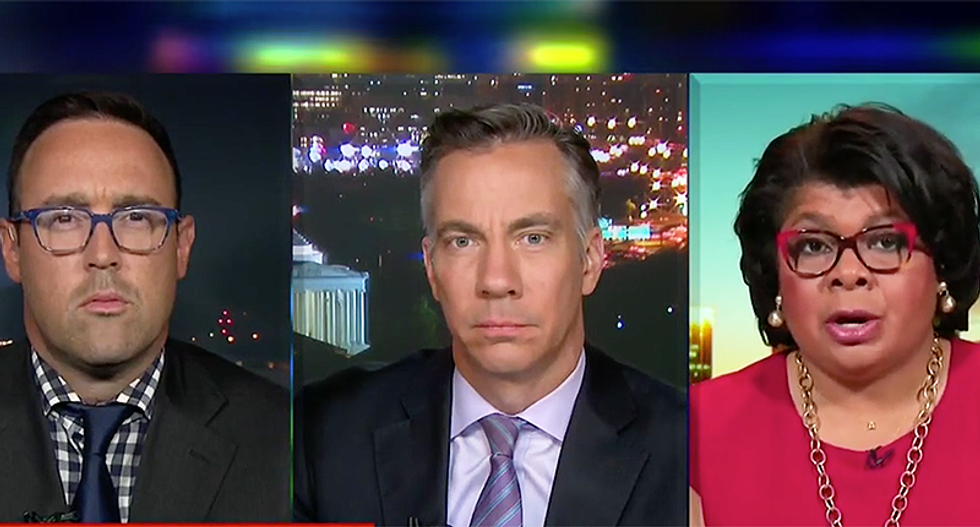 In a Thursday evening panel discussion with Don Lemon, the guests walked through President Donald Trump's inappropriate behavior that took a miscommunication and made things so much worse.

After Gen. John Kelly's press conference defending Trump, it became obvious that Trump didn't know how to talk to someone who lost their husband or son in the immediate aftermath. CNN's Jim Sciutto recalled that Kelly explained that he was the one who told Trump that this was what these soldiers signed up for and they were doing their honorable duty serving their country as heroes.

Generals have spoken on CNN throughout the week explaining that such a message might work for a fellow Marine, but not for a 24-year-old grieving widow. To make matters worse, Trump bumbled the language in his inelegant way was misconstrued as a callous lack of empathy.

Lemon explained that the White House could have come out and explained that it was obviously a miscommunication and send heartfelt thoughts and prayers. Trump, Kelly and the White House advisors took another route and attacked Rep. Frederica Wilson (R-FL), who is close to the Sgt. Johnson's family and had him in her leadership class.

White House correspondent April Ryan explained that the White House was systematically attempting to discredit the congresswoman and double down instead of take the high road.

"Don, I have been in conversation with Congresswoman Wilson, who said the reason why she heard [the call] is because the Master Sergeant had the call on speakerphone for all in that car to hear, to include family members of the late Sgt. La David Johnson, his widow, the congresswoman herself, her staff, as well as the Master Sergeant," Ryan said. "And she was in there as well as other people who listened to it. She even said she heard what the president had to say, and she wanted to say something, but the Master Sergeant said no. She was very upset with his words."

CNN's Chris Cillizza chimed in saying that Kelly's words "basically confirmed that what the congresswoman said was right."

"He tweeted 'Democratic congresswoman totally fabricated that. I said what I said to the wife of a soldier who died in action and I have proof,'" Lemon read Trump's tweet.

The panel concluded Kelly's words were "a very powerful way of political cleanup." They agreed it was a difficult position for any political leader to be in and a difficult thing for anyone to do. Given Trump's lack of experience in public service, he's never been put in a position like it before. Add to it, when Trump feels defensive, he doubles down, lies and attacks others to distract from his own missteps. Once again that happened, and the family of a fallen soldier became a "political football."