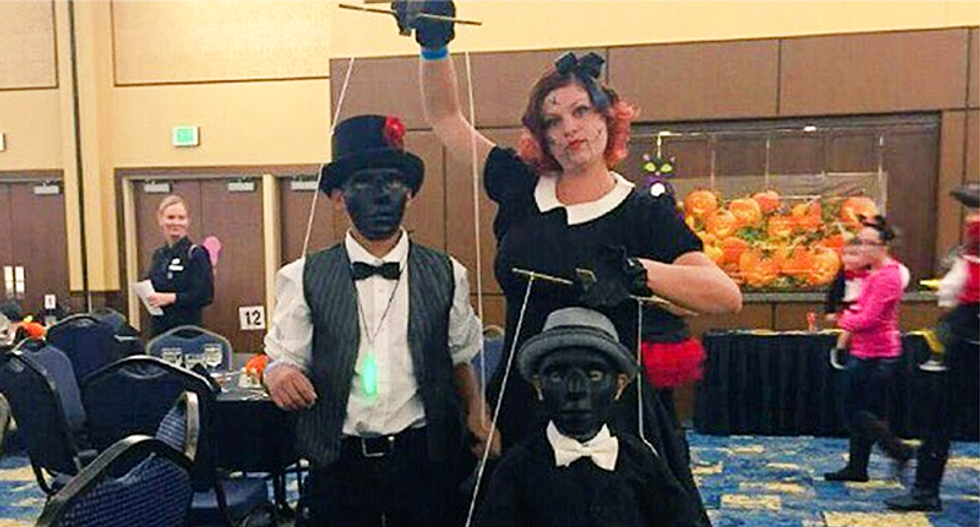 A family "Spooktacular Halloween party" at Fort Bragg is drawing criticism after two children dressed in blackface were photographed with marionette strings.

According to a WTVD report, the North Carolina community is shocked.

“This is what’s wrong with the country right now," she said. "People can just be as racist as they want. Then you’re supposed to laugh it off. You know, segregation wasn’t that long ago. My dad is African American.”

The puppeteer appears to be manipulating the children in blackface. There's a long history of blackface puppetry in the United States, used as entertainment for whites to make fun of blacks who appear to be bumbling fools. "In the Western tradition often just the opposite has occurred, with puppeteers disseminating racist stereotypes in the name of audience appeal and upholding tradition," wrote Amber West in an analysis for the Union Internationale de la Marionnette - International Puppetry Association.

This pic was posted on Fort Bragg's Family and MWR Facebook page.Can you guess why it's getting a lot of attention?… https://t.co/hkuDmfqZ9q
— Akilah Davis (@Akilah Davis)1507948844.0

The photo has now been removed and an apology was issued saying that the photo should never have been posted. The Bingham family still finds it offensive and want to know why it happened.

“How can you expect us to want to support this installation and organization when you have no respect for our people?” asked Tammi Bingham.