Fox host rips men over girl Thomas the Tank: 'I'm about to have a girl and I don't think it ends her childhood' 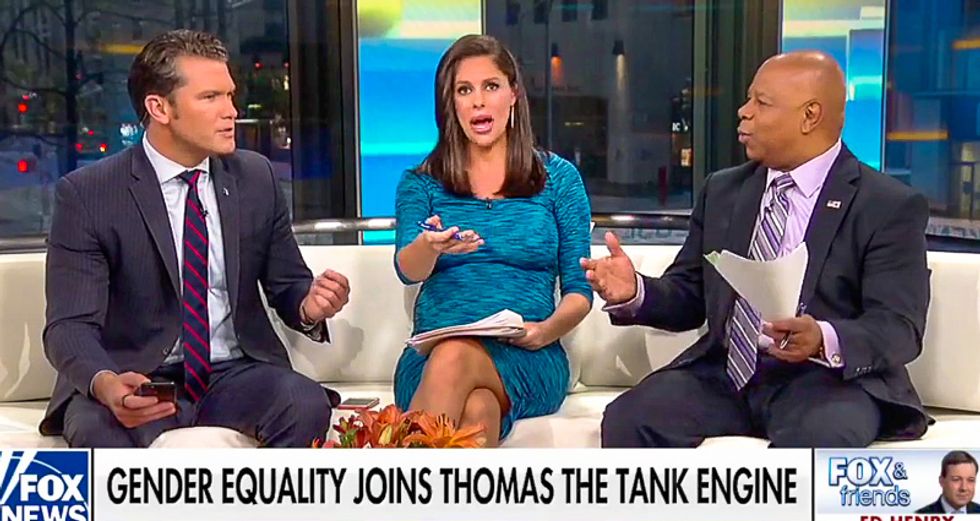 The weekend hosts of Fox & Friends argued over whether female "Thomas the Tank" characters "kill childhood" by injecting politics into the lives of children.

On Sunday's edition of the Fox News morning show, hosts Pete Hegseth and David Webb expressed dismay over the decision to add two female characters to the Thomas the Tank Engine television program.

"Traditionally boys have loved trains," Hegseth said. "And girls probably do too. But there are more boy engines than girl engines. They're balancing it out. They're getting rid of two of the male trains and replacing them with female trains, one from Africa. And then the other changes -- they are going to make Thomas more sustainable. He's going to follow U.N. goals and stop polluting so much."

"Can't we just let childhood be childhood?" Webb complained. "You're right. It's more boys and trains. That's kind of the way it worked. You know, it's just the way you grew up. But girls watch it too. But now it's the agenda that drives it. I'm not against girl or boy trains or any trains. I would like to see a nice high-speed train represented, whatever the case may be."

"But, you know, Abby, I just don't see the agenda being the real driver," he added, turning to co-host Abby Hunstman.

Huntsman, however, said that she wasn't bothered by the female train characters.

Webb asserted that the agenda behind the new characters "pollutes" the program and contributes to "killing childhood."

"Does that kill childhood?" Huntsman exclaimed. "Because I know I'm about to have a girl and to show her that, I don't think that ends her childhood."

"Seeing girls on the face of these trains, I think that's empowering women," she insisted. "I didn't know that [when I watched the show as a little girl] because all I had was a boy train at the time."

"Was that not empowering?" Webb asked.

"I think it's just the idea of showing young women, we can be just like men, we can do whatever we want to do," Huntsman replied.

"Of course you can be," Hegseth scoffed. "What about the Ninja Turtles. They are all boys. Do we need two female ninja turtles?"