'I was gonna curse him out’: Rep. Wilson describes hearing Trump's phone call with widow of fallen soldier 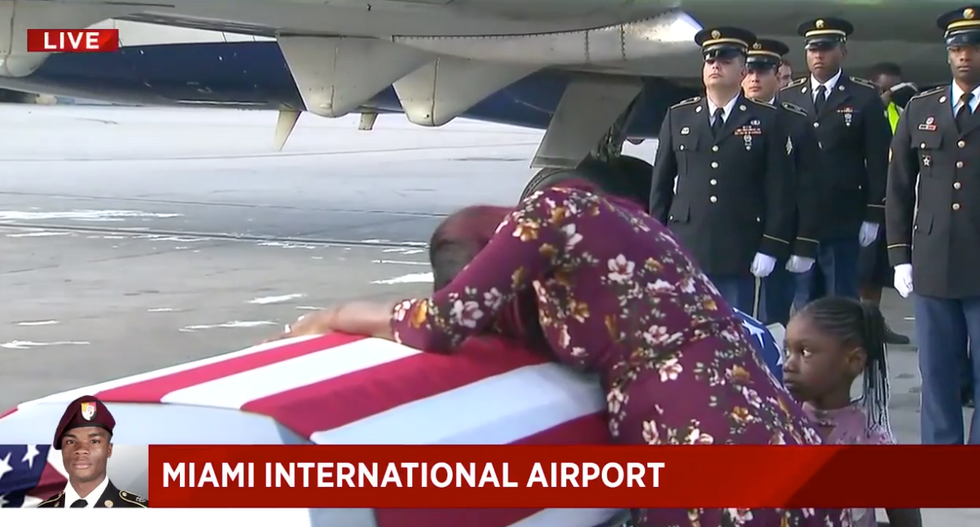 Rep. Frederica Wilson (D-FL) on Tuesday spoke with CNN’s Don Lemon about the phone call between Donald Trump and the widow of U.S. Army Sgt. La David Johnson, explaining she “was gonna curse” the president out after hearing his remarks.

Wilson was with Johnson’s widow  just before the soldier's remains arrived at Miami International Airport, ABC 10 reports. That’s when Trump called the pregnant mother of two and told her that her husband “knew what he signed up for.”

“We were in the car together, in the limousine headed to meet the body at the airport,” Wilson told Lemon. “So I heard what he said because the phone was on speaker.”

"This is a young, young woman, who has two children, who is six months pregnant with a third child,” Wilson said. “She has just lost her husband. She was just told that he cannot have an open casket funeral, which gives her all kinds of nightmares how his body must look, how his face must look. And this is what the president of the United States says to her?”

“There's no reason for the president to be so insensitive,” the Democratic representative added. “Not only to the family of this soldier, but the impervious rhetoric, you know, disrespectful to the family of every soldier that has paid the ultimate price for our freedom.”

“Our community is livid,” Wilson continued. “Because this was our hero. We don't have many heroes in our young men in Miami-Dade county. But he was a hero for us. And we don't like what was said.”

Asked by Lemon what her reaction was, Wilson said she asked for the phone because she “was going to curse [Trump] out.”

“That was my reaction at that time,” Wilson explained. “I was livid. But they would not give me the phone.”

Wilson noted Johnson’s widow "couldn’t say anything," while other family members in the limo “were all crying.” She said the family is still upset “because they don't know why he was separated from the rest of the soldiers.”

On Tuesday, the U.S. military opened a formal investigation into the deaths of those four American solders in Niger, White House correspondent Ross Palumbo reports.

BREAKING: US Military has now launched a formal investigation into the death of 4 American Soldiers, including LADA… https://t.co/N2pRlSlGDC
— Ross Palombo (@Ross Palombo)1508266434.0

“This could turn out to be another Benghazi,” Wilson said, adding she wants “to find out exactly what happened.”