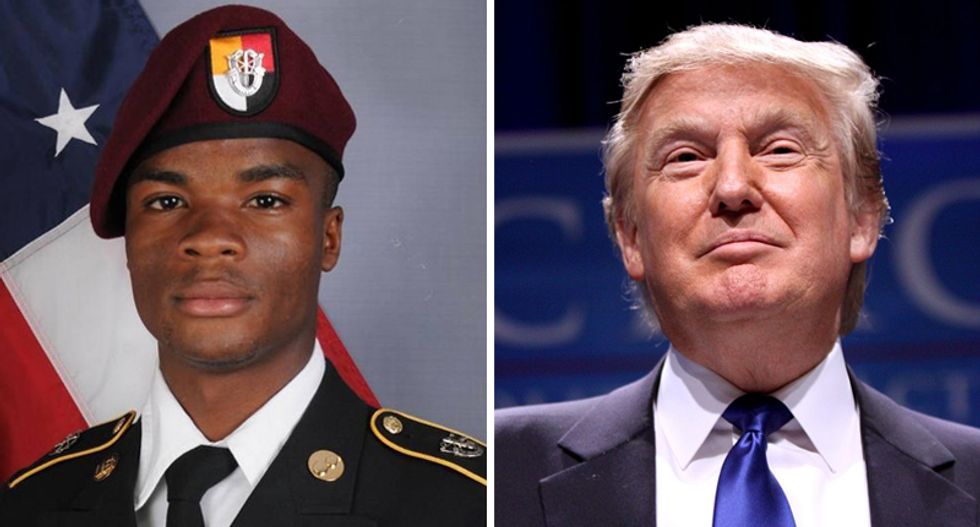 Donald Trump on Tuesday finally called the families of four U.S. soldiers who were killed during an ambush in Niger earlier this month, only to tell the widow of U.S. Army Sgt. La David Johnson, "he knew what he signed up for.”

"Yes, he said it," Rep. Frederica Wilson (D-FL) told ABC. "It's so insensitive. He should have not have said that. He shouldn't have said it."

BREAKING: @RepWilson says @realDonaldTrump told soldier's widow "He knew what he signed up for... but when it happe… https://t.co/dzjMvQVBGp
— Ross Palombo (@Ross Palombo) 1508282803.0

According to Wilson, Trump later added, "But when it happens it hurts anyway."

The report comes amid growing controversy over Trump's delayed acknowledgment of the deaths of four servicemen, as well as his deflection of any criticism aimed at said delay. The president on Monday inaccurately claimed his predecessors, including former presidents Barack Obama and George W. Bush "did not call"the families of fallen soldiers and sometimes "didn't do anything" to acknowledge those killed in the line of duty.

When Johnson's body was returned to Dover Air Force Base on Saturday, Trump was golfing.