‘I’m not dignifying that’: Rex Tillerson snaps at Jake Tapper for asking if he called Trump a ‘moron’ 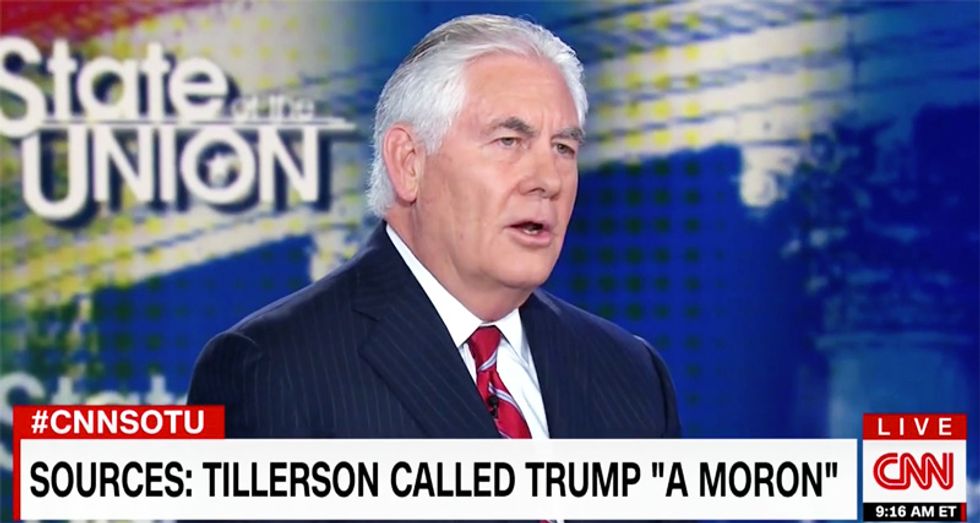 Secretary of State Rex Tillerson grew a tad testy with CNN's Jake Tapper on Sunday morning as the nation's top diplomat was repeatedly asked if he called President Donald Trump a "moron."

Appearing on State of the Union, Tillerson described efforts to deal with North Korea before the CNN host brought up the Trump "moron" comment, setting off an exchange where the Secretary of State continued to duck giving a direct answer, saying he wouldn't "dignify the question."

"Jake, as I indicated earlier when I was asked about that, I'm not going to deal with that kind of petty stuff," Tillerson told the CNN host. "I mean, this is a town that seems to relish gossip, rumor, innuendo and they feed on it. They feed on one another in a very destructive way. I don't deal that way, I don't work that way and I'm not going to dignify the question. I call the president, 'Mr. President.'"

Tapper didn't let Tillerson off the hook, saying, "Ever since you called it petty, I've been thinking a lot about it because I'm a reflective guy and I understand the media makes mistakes and the media can always improve. But here's the thing: either you didn't say it, and there are people in the the press saying you did, and that's a serious problem. Or you did say it, and you're a serious guy."

"For you to say that expresses a real frustration with the commander in chief," Tapper continued. "When you don't answer the question, it makes people think you probably did say it. Either way, whatever happened, it is serious. So, can you please clear it up?"

"As I said, Jake, I'm not playing," Tillerson demurred once again. "These are the games of Washington. These are the destructive games of this town and they're not helpful to anyone."

"I'm not making a game out of it," Tapper fired back. "I'm trying to seek clarity because if I said that my boss was a moron, that would be a serious issue. It wouldn't be -- my boss doesn't control nukes. I'm willing to move on, but I want to be clear, you still haven't denied you called him a moron and, you know, a lot of people are going to watch this and think, he probably said it."

'I'm not dignifying the question with an answer, Jake," Tillerson said once more. "I'm a little surprised you want to spend so much time on it when there are so many important issues around the world to deal with."