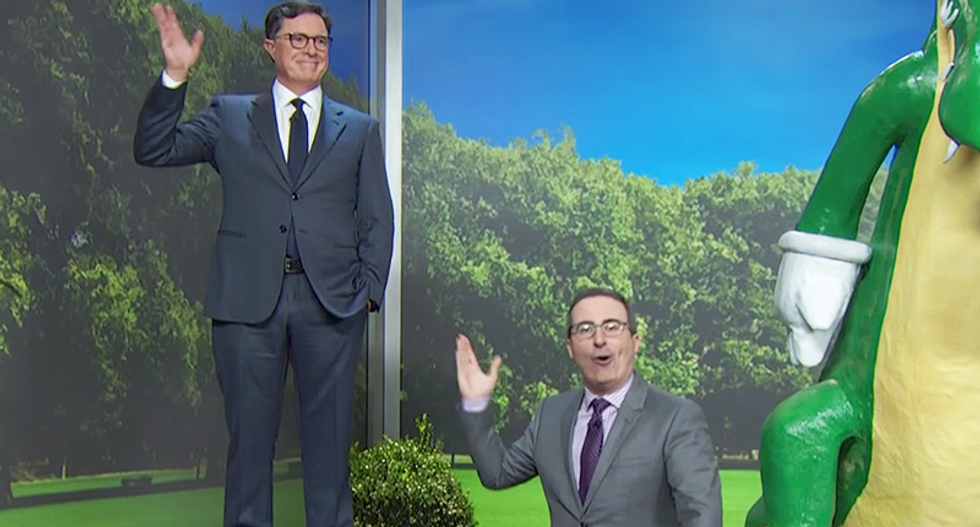 Of the 1,503 Confederate memorials across the United States, 718 are statues or monuments and 10 military bases are named after Confederate generals.

“Think about that," Oliver began Sunday night. "They were the enemy and they killed U.S. soldiers. That’s like finding out Nancy Kerrigan named her child Tonya Harding.”

It's an absurd concept because the South was not only fighting to maintain an economic that profited by enslaving people of color, they were fighting the union of the United States of America. Yet, a recent poll revealed only 38 percent of Americans cite "slavery" as a reason for the Civil War, Oliver cited.

He brought up the PBS series "Finding Your Roots," that walks celebrities through their ancestry and shows their reaction when they learn that they had ancestors that owned slaves. Ben Affleck made news when he demanded the show remove the mention of his family owning slaves. Larry David simply refused to believe it. Anderson Cooper learned that his ancestor was beaten to death by one of his slaves. He said that he was "blown away" and agreed that his ancestor obviously deserved it.

Oliver explained that none of these men are responsible for the "sins of the father," much less their ancestors. “I have to believe that; I’m English and I would like to go to an Indian restaurant at some point in my life," he said.

However, he argued that many must grasp the reality that these statues weren't put up after the Civil War, they were erected in the early 1900s by whites to intimidate people of color. White Southerners used these statues along with Jim Crow laws to continue to oppose the Civil Rights movement in the 1950s and 1960s. Oliver explained that some of these statues were even dedicated to members of the KKK.

So, when Trump and the white supremacists marching in Charlottesville claim people are attempting to "take away our culture" or "take away our history," what that really means is they demand these KKK dedicated memorials stand. He played a clip of Trump asking where it ends. "Somewhere!" Oliver exclaimed. "Anytime someone asks 'where does it end,' the answer is somewhere!"

“All people, living and dead, exist on what I’m going to call call the Hitler-Hanks spectrum from bad to good,” Oliver joked. He then unveiled a series of statues that are far better than the confederate generals.

“Why have a divisive Confederate statue when that pedestal can be filled by your favorite son, the actual Stephen Colbert," Oliver said about statues in Charleston, South Carolina. That's when he unveiled the Colbert statute, which "will stand there all day and tell you fun facts about your wonderful, town?”

For example, Charleston is the home to the first free public library in America.

“See, Charleston, you can have this 24-hours a day. Seven day a week!” Oliver raved. But the statue corrected he only does his show five days a week. Oliver marveled at his ability to do such a thing, asking how it is possible.