'Just calling a spade a spade': Ex-Reagan adviser stomps on 'those 3 idiots on Fox' for lying for Trump 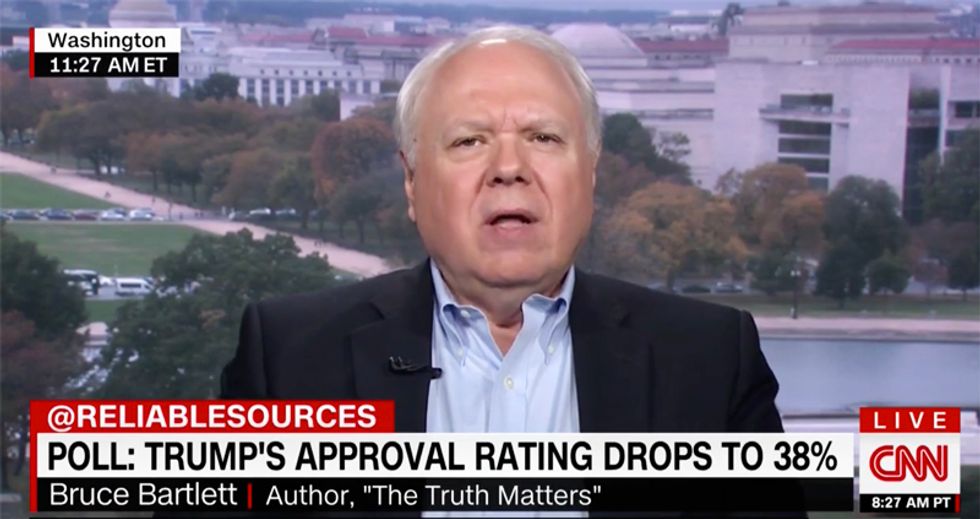 During a discussion on the influence that Fox News has on President Donald Trump's daily diatribes, a former official in the Reagan White House lashed at "those three idiots" on Fox & Friends.

As the topic turned from what host Stelter and guest Carl Bernstein called the "Fox Effect" -- using a cable news network as a propaganda tool -- to Fox hosts in general, Bartlett singles out the hosts to Stelter's dismay.

"One more example of this 'Fox Effect,' if I can call it that. Let me show you a brand new NBC/Washington Journal poll out this morning showing President Trump with a 38 percent approval rating, his lowest standing yet," Stelter said. "But I'm more interested in this other poll showing Trump at 38 percent -- a Fox News poll. But if you blinked, you missed it. They only showed this graphic once on air all week long. They spent a lot of money conducting this poll and CNN covered Fox's poll four times as much as as Fox did. Bruce, your reaction?"

"I think sometimes we get the cause and effect relationship backwards," Bartlett responded. "We think, oh, we see this Hillary non-story about uranium. We think the White House leaked it and encouraged Fox to run with it. I think it's the other way around."

"The people at Fox are thinking 'what can we do to help Trump today? Well, let's gin up the Hillary story again," he continued. "You yourself have reported on many occasions that those three idiots on Fox & Friends seem to be --."

"Well, because i think we have to call a spade a spade," Bartlett shot back. "I think one of the problems in the media is that they're afraid to say Trump is lying. They're afraid to say that the people at Fox are just propaganda. I'm trying to use plain language to say what I think is the truth."