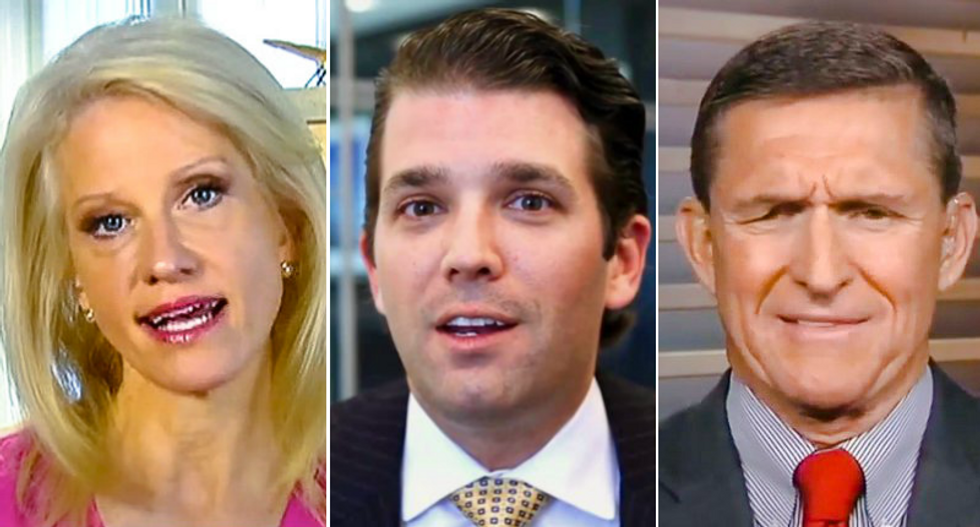 A report by The Daily Beast reveals that the @Ten_GOP Twitter account, which masqueraded as the "Unofficial Twitter account of Tennessee Republicans," was actually operated by the Kremlin-backed "troll farm" Internet Research Agency. The report also claims that @Ten_GOP tweets were shared by multiple Trump staffers in the weeks and days leading up to the 2016 presidential election and its' aftermath.

"Mother of jailed sailor: 'Hold Hillary to same standards as my son on Classified info' #hillarysemail #WeinerGate," read one tweet from the since-deleted account retweeted by Conway two days prior to the election.

"BREAKING: #VoterFraud by counting tens of thousands of ineligible mail in Hillary votes being reported in Broward County, Florida Please, RT," another, shared by Trump, Jr. a week before the election, claimed.

Those outside of the president's inner sanctum also shared tweets from the account, including the conspiracy theorist son of Flynn (who shared tweets from @Ten_GOP a reported 34 times) and Trump's digital media director Brad Parscale retweeted it as well.

According to the report, the account's pro-Trump rhetoric didn't end after the election.

The account was permanently banned by Twitter on August 24, 2017 after it was caught "passing a photo of the 2016 Cleveland Cavaliers NBA Championship parade in Cleveland as a picture of the crowd gathered outside a Trump rally in Phoenix."