'Look! Over there!': Jake Tapper calls out Trump admin for trying to divert attention from their own scandals 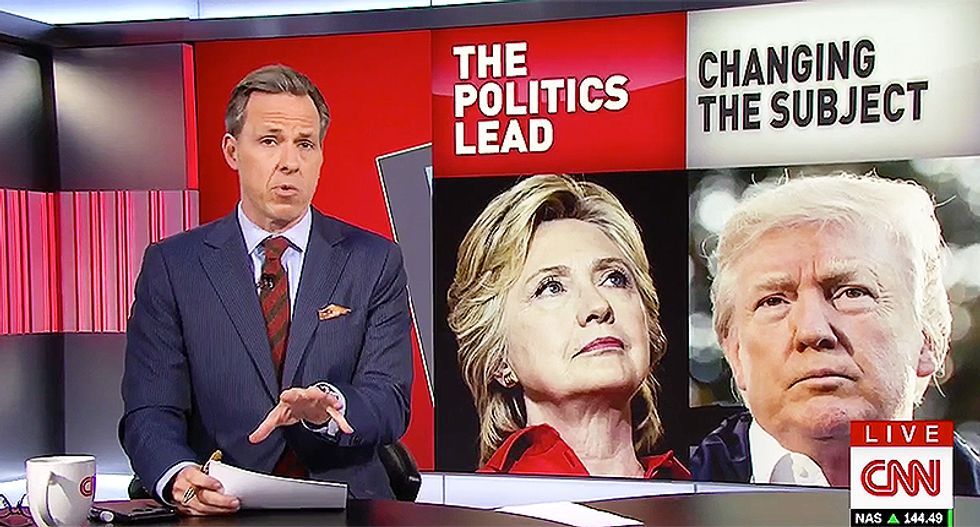 At the top of "The Lead with Jake Tapper," the host quipped that President Donald Trump's White House seems to be using the "Look! Over there!" defense to divert attention from his own sandals.

Tapper explained that the White House has very obviously attempted to "ramp up" efforts to "turn the spotlight away from questions about itself and investigations into possible collusion with Russia or possible obstruction of justice and the firing of FBI Director James Comey."

The Trump White House is now employing a Pee Wee Herman "I'm rubber and you're glue" defense for accusations of Russia collusion.

Instead, they've tried to "highlight matters pertaining to the previous president" and Hillary Clinton. In his Friday morning tweet, Trump claimed that the costly investigations against him were over and proved no evidence of collusion. He now is demanding a similar Russia investigation into Clinton.

"A couple of points there," Tapper said. "That of course is not commonly agreed. It's still being investigated. Second, the investigation is not just about Russia and Trump. It's also about the Trump team, people like Paul Manafort and Carter Page and on and on. The White House has made it very clear they want all of you to look elsewhere."

Look no further than press secretary Sarah Huckabee Sanders' press briefing Friday, Tapper noted. She named the DNC and Clintons for paying for the infamous dossier, but neglected to mention that it was originally commissioned and funded by the GOP. Meanwhile, Trump kicked it up a notch by removing the gag order for an undercover FBI informant to uncover connections between Clinton and Russia.