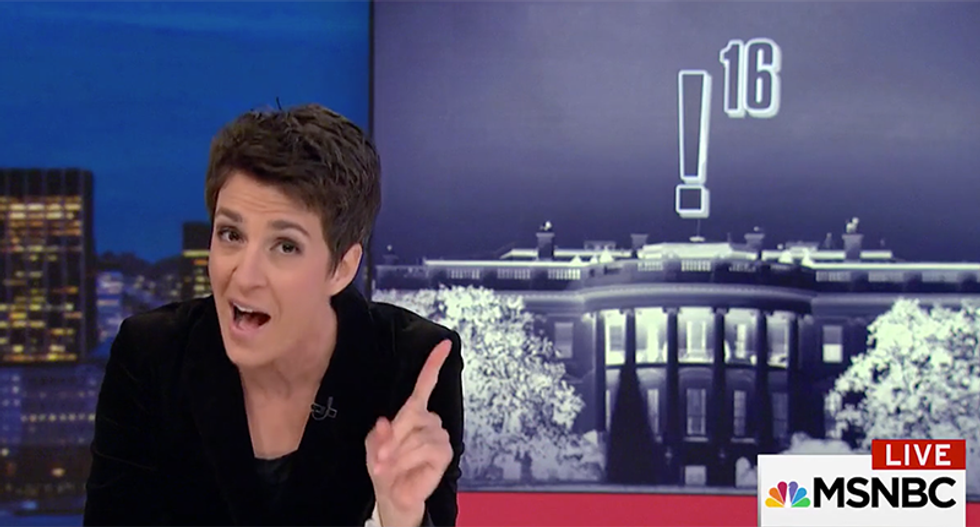 In one of the strangest links in President Donald Trump's Russia scandal yet, MSNBC's Rachel Maddow noticed an interesting history with a key lawyer.

During Thursday's show, Maddow hilariously mocked Trump's "slapstick legal team," including "the amazing mustache guy" and another attorney who seems to have disappeared. "Maybe he got Raptured," she speculated. But years ago, Trump had an attorney that helped him with an incident involving Bill Maher.

In 2013, Trump offered President Barack Obama $5 million for proof that he was born in the United States. In return, "Real Time" host Bill Maher offered Trump $5 million if he could prove he wasn't the spawn of an orangutan. While Obama refused to dignify Trump with any attention or response, the self-proclaimed billionaire sent Maher a bill along with his birth certificate.

This week, The Washington Post and CNN reported a story about greater details between Donald Trump Jr. and Russian lawyer Natalia Veselnitskaya. The intermediary between Veselnitskaya and the Trump campaign were Putin-linked Russian billionaires Aras and Emin Agalarov. The lawyer that represented Agalarovs is none other than Scott Balber.

"The same lawyer who represented Donald Trump in his stupid fight with Bill Maher in 2013 over whether or not Donald Trump was secretly half an orangutan," Maddow continued. "Maybe there was just the one time but he was Trump's lawyer on something like that. He is now representing the Russian side of the Trump Tower meeting, where the top echelon of the Trump campaign took a meeting with Russian officials to get assistance in the election including dirt on Hillary Clinton."

Maddow's research team reached out to Balber to ask if there was a connection to his representation to Trump and to the fact that he now represents Putin-linked Russian oligarchs. His response was short.

"But when somebody who used to be the president's lawyer, quite recently, turns up in the middle of that investigation representing the Russian side, that seems like something that requires more than 'nice try' as an explanation," Maddow noted. "If the president had less hilarious legal representation in the first place, we could probably expect more of an explanation than that. But in this world that we live in..."