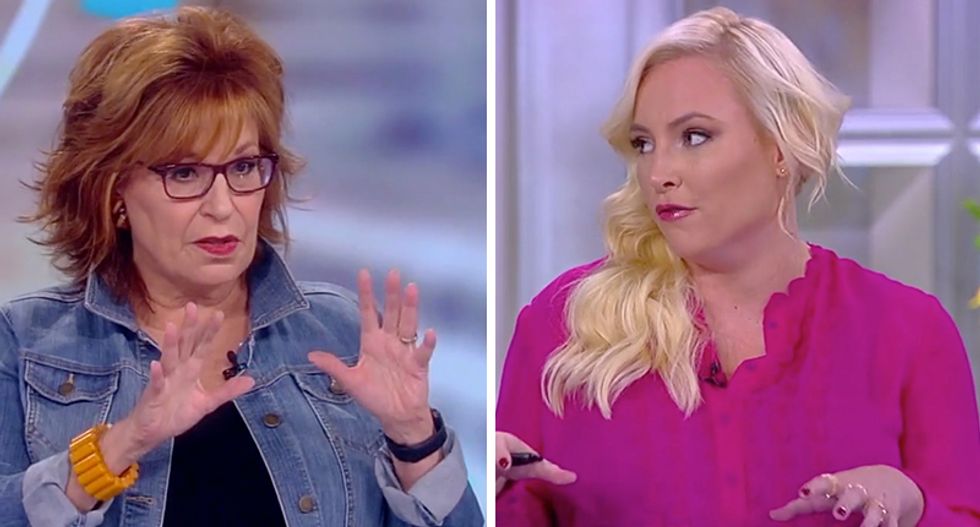 During a discussion about rapper Eminem's criticism of Trump at the BET Awards on Wednesday's "The View," co-host Joy Behar said that it's hard for people to stand up like this because they can lose fans and money.

"Very few people in the industry will go out and say 'I don't care if you don't support me. This is more important than my popularity,'" Behar said.

Co-host Sunny Hostin agreed, saying that she was at the hair salon and the whole place "roared" when it happened.

"It takes bravery to put your career on the line saying we should be talking about Puerto Rico, we should be talking about Las Vegas. We shouldn't have a Twitter fight with the Panthers," she continued. "I have thought it was very brave. We have this discussion all the time where people with a platform should they use their platform to make these kinds of political statements."

New co-host Meghan McCain said that she was calling "B.S. saying it's brave to call out the president." Instead, she said that it braver to be a conservative in Hollywood.

"I know friends who have been black-balled for their beliefs," McCain said. "I know Eminem, and I remember when Eminem went after President Bush and said 'I don't rap for dead presidents. I would actually like to see the president dead.' He was investigated by the secret service in 2003. What helps breed Trump is when all Republicans are Nazis or the worst and awful. If Mike Pence were president, would some of these people who have all these problems have the same problems?"

Whoopi Goldberg said that when people "speak their minds as themselves" it is a brave move because it's professionally dangerous. "People will take you out, yell at you, hit you, spit on you," she said.

McCain doubled down that it's more socially acceptable to be a liberal in Hollywood, but Goldberg disagreed, saying that in Hollywood it's more about what "in." She clarified that she didn't mean "in office" but in fashion. Over the course of the last 50 years that Goldberg has spent in Hollywood, she explained that she's seen it swing back and forth.

"The reason I think he's brave is because he has something to lose," Behar chimed in. "You talked about people in politics. [Sen.] Bob Corker (R-TN), who's retiring, is now saying Trump is leading us to World War III. There is radio silence from the Republican Party."

"That's not true," McCain shot back.

"Tell me who else," Behar replied.

"We're talking about the moment -- you're hedging a moment. I lived in Los Angeles for a year and a half working on another show. I've never been more harassed for being a Republican since i lived there," McCain replied, changing the subject.

While many Republicans have criticized Trump on various issues, including McCain's father, no other Republican leaders have talked about Trump making the world a more dangerous place with his ongoing feud with the North Korean leader.

Meghan McCain changes the subject when Joy... by sarahburris