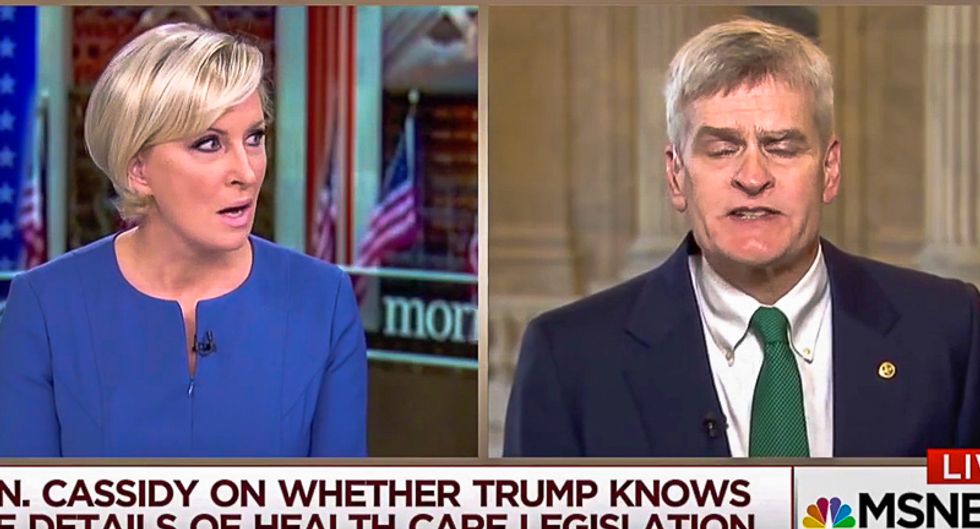 The hosts of MSNBC's Morning Joe called out Sen. Bill Cassidy (R-LA) on Thursday because he suggested that President Donald Trump speaks in "hyperbole" but he never lies.

"Hold on a second," Brzezinski interrupted. "Senator, is it fair to say that that the president has not told the truth at times on any level, on anything? I'm not trying to get into his head, I'm trying to get into yours and understand exactly where you are coming from. Has this president ever lied?"

"I, frankly, don't focus on that, Mika," the senator said, mispronouncing Brzezinski's name. "I kind of look at the issue before us, what is the core? And if I get distracted by, 'Well, is the hyperbole a lie or is it not a lie.'"

"We got it," Brzezinski quipped. "Sen. Bill Cassidy, I understand completely. Thank you very much."

According to Scarborough, "you could smear spaghetti sauce and have 3 year olds do pictures in crayon with their feet, and if you told him it was a health care bill, he would say, 'This is the most sweeping comprehensive health care bill of all time. I will sign it now.'"

"It's unbelievable that you had a comparison of Donald Trump to FDR, Donald Trump to Dwight Eisenhower and then a suggestion that Donald Trump just deals in hyperbole and we're just to look the other way," Scarborough said.

"That was a profile in courage," Brzezinski concluded.