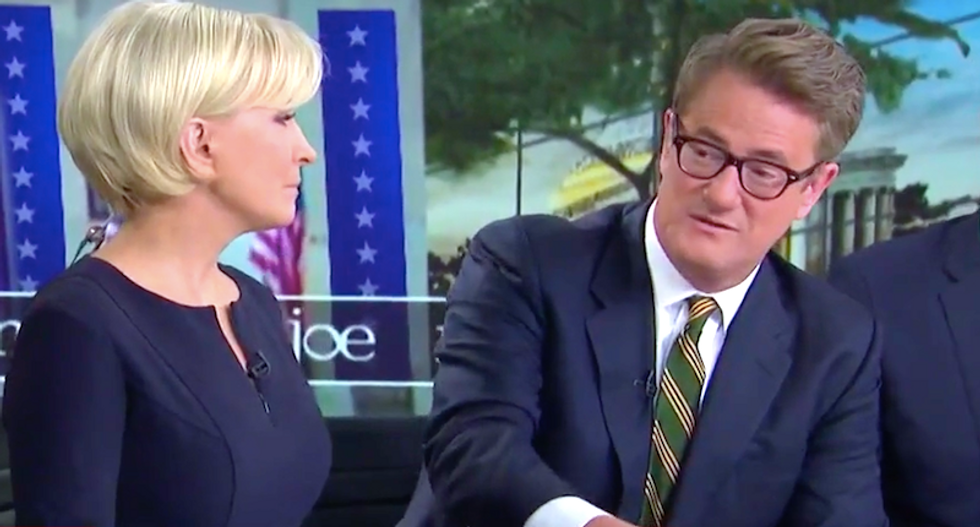 MSNBC's Joe Scarborough explained that anti-government hysteria kept gun advocates from accepting any measure to limit access to even the most deadly firearms.

The "Morning Joe" host said gun advocates insisted after every mass shooting that no laws could have stopped that tragedy, but he said law enforcement officials strongly disagreed.

"There's no reason Americans should have military-style weapons in their possession," Scarborough said.

He said the debate about firearm laws was fundamentally flawed because gun advocates refused to acknowledge the reason they wanted to stockpile military weaponry.

"There's only one reason for people to have these weapons in their hands," Scarborough said. "Only one reason, and it's only one -- (but) they will not say it in a radio debate or a TV debate. It's because they think the government is coming to get them and they want to have a stockpile of weapons, and so it's to kill American soldiers or members of the American government."

He said collectors who intended to use their weapons for lawful purposes simply didn't need ready access to guns at any time.

"There are some people that just like collecting and shooting," Scarborough said. "Fine, you can do what other countries do, register them and put them, you know, in the gun clubs where they stay there."

Clint Watts, a former infantry officer in the U.S. Army and a counterterrorism specialist for the FBI, said highly trained soldiers face more restrictions in carrying weaponry than their civilian counterparts.

"One of the strangest things for me having come from the military, you know, we carried around training for weeks, (but) we weren't allowed to carry ammunition with our weapons," Watts said. "You can go buy that exact same weapon I was trained on and the ammunition at any time, at any time that you want. You can deploy it in any way you want."

"It is no coincidence when we look at the death toll of Orlando," Watts continued, "when you look at Las Vegas, when you see what terrorists do when they get these weapons in their hands, this escalation over the past two, three years continues to climb. There's nothing that will change that."