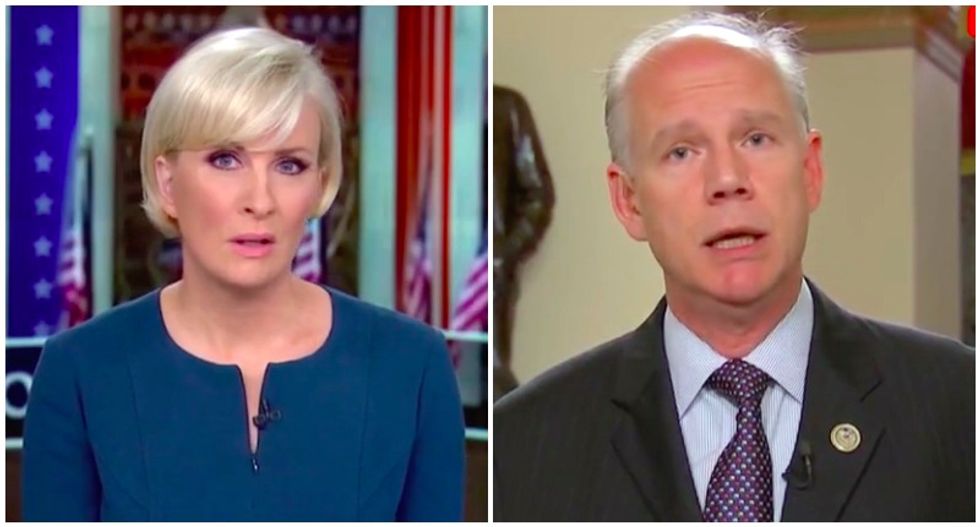 MSNBC's Mika Brzezinski was visibly disgusted by a Republican lawmaker's refusal to say whether he believed President Donald Trump was unfit for office.

After Rep. Dan Donovan (R-NY) appeared Tuesday on "Morning Joe," it's easy to see why Republicans are keeping a low profile.

"It's not a question of trust in the generals," Brzezinski said. "It's, I think, at this point a question about his intellectual and emotional capacity to lead. So what is your response to Bob Corker's comments?"

Donovan briefly touched on the chairman of the Senate Foreign Relations Committee's remarks before quickly changing the subject.

"You know, I don't know where that comes from," Donovan said. "I think we're pointing a finger, the real devil, the real villain in this is the leader of North Korea, launching rockets over Japan, some of them landing in the Sea of Japan."

He then attacked the Obama administration for failing to stop Kim Jong-un from pursuing nuclear weapons, and praised Trump for speaking more strongly against the North Korean leader.

"You know, in the past administration, we had this patient waiting strategy, which certainly emboldened him, and I think the president has taken a stance, I think he's, again, making sure that America is a world leader here," Donovan said. "That evil person in North Korea is not just a threat to the United States, he's a threat to China, the Korean Peninsula, European Allies and a threat to the entire globe."

The GOP lawmaker then claimed Trump had drawn international support for his provocations, before Brzezinski cut him off.

"The president had President Xi (Jinping) from China down in Mar-A-Lago speaking to him about needing the help of the Chinese to put this to rest," Donovan said, "and to stop the violence and the threats that are coming out of North Korea, so I think he has taken a leadership role in this, and he's looking at allies and looking at some people we have some differences with."

The MSNBC host tried to steer the lawmaker back on topic.

"I know, congressman, but with all due respect, my question was about Sen. Corker," Brzezinski said. "Are you saying that his comments are not credible?"