National guardswoman confronted by racial slur-hurling white man speaks out: 'I will continue to stand tall' 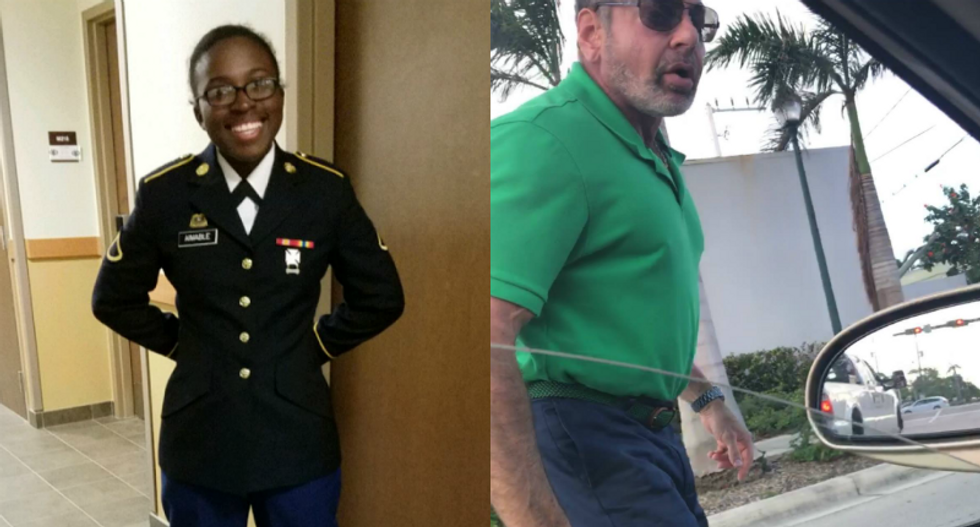 Geminia Aimable, a 19-year-old Army National Guard private, says she was in uniform when a white man who cut her off in traffic followed her multiple blocks to accost her. It was the first time someone had ever called her the n-word to her face in her 19 years, and after a friend shared her ordeal on Twitter, she soon went viral.

"[The man] told me to never forget that I am nothing but a n**ger and that us n**gers do not deserve to serve this very country and to take off my uniform and to kill myself," Aimable wrote in her post on October 10.

In an interview with Raw Story, Aimable has spoken out about the incident in Florida, about those who believe protesting racism is unpatriotic, and about moving forward.

When the man first confronted her with the racial slur, Aimable said that her initial response was one of anger, and then of fear.

"I wanted to fight him. I wanted to make him take those words back," she told Raw Story. "I also remembered that I am in uniform and I must conduct myself accordingly. Also, I, as an African American or a n**ger in his sense, I tend to be stereotyped as violent, so why fulfill their stereotypes?"

Though it was her first brush with such violent racism, Aimable said that living as an African American with the country's current race relations has weighed heavy on her.

"With this uniform comes a lot of power and responsibilities," she said. "There are moments were I wish I could join friends in protest. Instead, I write poetry on equality for all especially the LGBT community and poetry on racism."

She also said she supports prominent African Americans like Colin Kaepernick and other athletes who take a knee to protest racism and police brutality -- and does not see their actions as an affront to the flag or to the troops, as President Donald Trump and others have claimed.

"I will never forget that I am not only a soldier but also a minority that's fighting for this country that also sees that racism is still a prominent issue," Aimable said. "They can take a knee, I will continue to stand tall and proud for I fight for this very country."