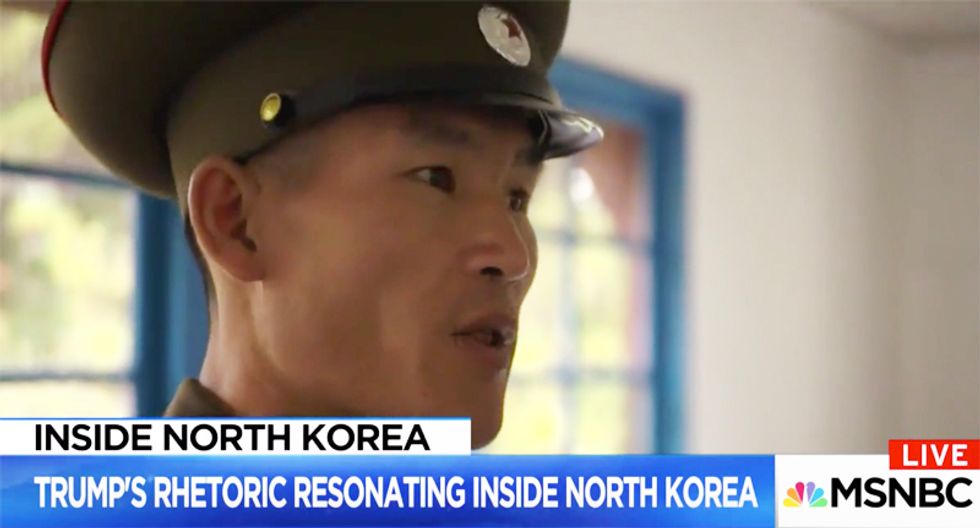 In a report on the rising tensions between the United States and North Korea, an officer in the Korean People's Army expressed confidence that his side would prevail in a possible thermonuclear war because President Donald Trump is "mentally ill."

In what should be concerning coming from an officer steeped in a military culture that reveres its supreme leader, the unidentified officer expressed great confidence that victory would be assured.

Touring the DMZ between North and South Korea, MSNBC reported, "They call this the demilitarized zone -- it is anything but. Every day these North Korea troops stare down their American and South Korean counterparts, both safe today on a hair trigger. That's the border between north and south -- on this side socialism and that is where the capitalist side is."

"In a war, this would be ground zero," the narrative continued. "Our exchange with the North Korean lieutenant colonel reveals why the two sides so close at this border are so far apart."

"What do you think of President Trump?," the military officer was asked.

"Trump is mentally ill," the young officer calmly explained, before adding, "If there is a war with America, we will win."