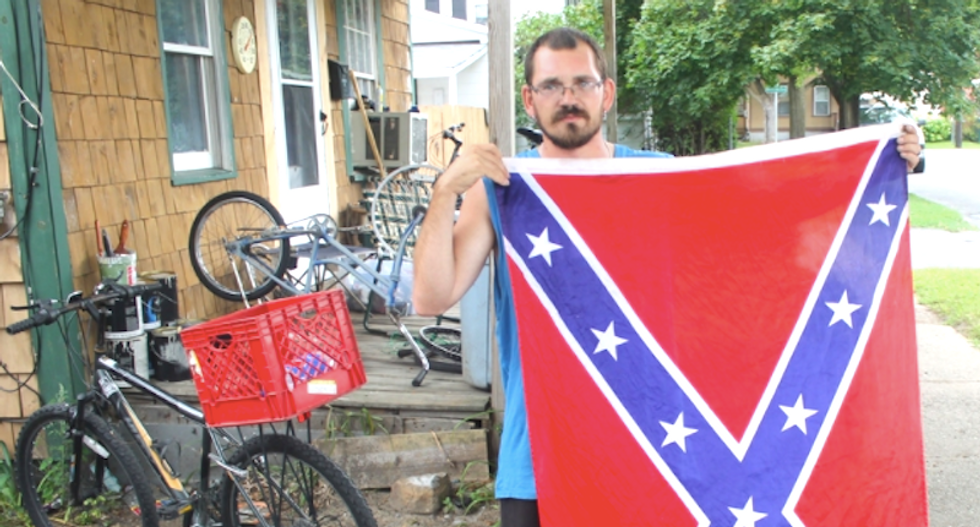 An upstate New York couple was trying to explain to a reporter that their Confederate flag was not a racist symbol, so they interrupted a black teen to ask them to comment.

Ricky Barber, 28, and his fiancée displayed the flag outside their Plattsburgh home earlier this year, and their neighbor -- an NPR reporter -- asked them to explain why they displayed the Civil War flag so far north in Union country.

"You'll hear all these people that gathered down South that are blacks," said Barber, who grew up in Georgia. "What about their Black Lives Matter flags? That's pushing back on the white people. Us white people, we retaliate by, 'Hey, we got a Confederate flag and whatnot.'"

Although his reasons were admittedly a form of racial retaliation, Barber and his 30-year-old fiancée, Becca Lee, insisted they were not racist.

"We are not a racist couple, and we own the flag," Lee said. "I don't judge people. I don't care what color skin they are -- if they need defending, I'm going to defend them. That's what a Southern belle does."

The reporter said his neighbors then tried to prove their point by asking a 13-year-old black neighbor playing nearby to validate their feelings.

"Are you opposed to the flag at all?" Barber asked the teen. "Do you have a problem with the flag, as a black person?"

The teen's answer genuinely seemed to surprise the couple, according to the reporter.

"Yeah, it is offensive to me," the teen said. "This is the flag of people who want to bring slavery back."

The astonished couple asked the teen to meet with them sometime so they could explain what the flag meant to them, but it's not clear the teen will take them up on the offer.