Rachel Maddow and Chris Hayes unload on Vegas shooting: 'If this isn't terrorism, what the hell is?' 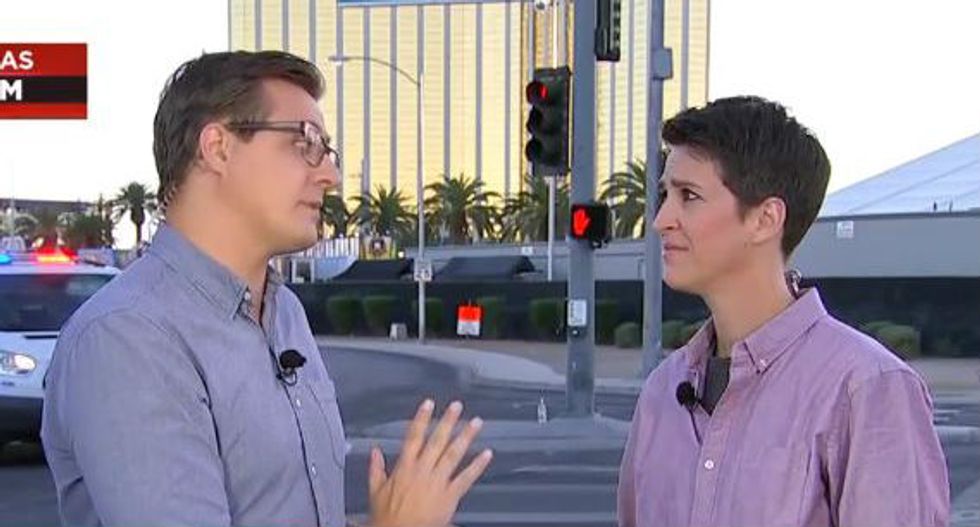 On Monday evening, in the aftermath of the deadliest mass shooting in modern American history (so far), MSNBC hosts Rachel Maddow and Chris Hayes spoke about the "sheer magnitude" of the attack that killed 59 and injured more than 500 others.

Standing outside the Mandalay Bay hotel where Stephen Paddock shot at concertgoers, the hosts said that regardless of the millionaire gunman's motives, the fact that he was able to purchase those weapons should be, but isn't, taken into account.

"It's a technological thing that happened here," Maddow said. "It's what he had at his disposal in terms of machinery to do this. And we still can't address that as a country."

Hayes went on to point out that the large distance between the hotel room where Paddock was shooting and the grounds of the country music festival he targeted, "which doesn't strike you until you're up against the scale of it," made the carefully-executed attack all the more terrifying.

"There is this question about terrorism, and it almost feels like that word has been exploded of meaning," Hayes said. "If this isn't terrorism, what the hell is terrorism?"

Watch the two hosts discuss the "sheer magnitude" of the attacks below, via MSNBC.