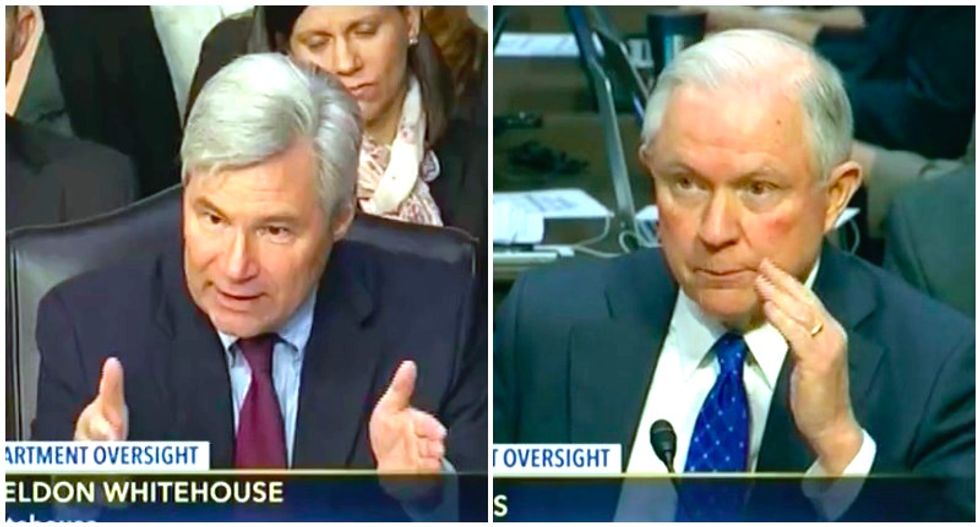 Sen. Sheldon Whitehouse (D-RI) asked the attorney general to explain why he claimed conversations with President Donald Trump were privileged when the president had not claimed executive privilege.

"Executive privilege cannot be invoked except by the president," Sessions agreed.

Whitehouse pointed out that the attorney general has the authority to determine whether executive privilege shall not be invoked, under the law, but Sessions disagreed.

"Okay, I'm reading aloud," Whitehouse said. "The attorney general and the council of the president may determine that executive privilege may not be invoked in the request of the lease of information. It says it right there."

Sessions said he still didn't believe he could release that information without the approval of the president.

"They can't release -- of course, they have to be able to release information without the approval of a president," Whitehouse said. "You do it all the time."

Sessions backtracked, saying that certain core duties of the executive branch were privileged -- but Whitehouse pounced.

"Even for that, there is still this rule that the issue has to be presented to the president," Whitehouse said.

The senator accused Sessions and the White House of trying to have it both ways.

He also asked the attorney general which Justice Department official was responsible for making recommendations to lawmakers about specific remedies to ensure Russia and other foreign agents were unable to interfere with upcoming elections.

"Is there such a person, and what is his or her name?" Whitehouse asked.

The attorney general told the Senate Judiciary Committee that U.S. Attorney Dana Boente, an Obama appointee, would most likely head up that international security review, but he wasn't sure what steps had been taken.

"I'll be frank," Sessions said. "I don't know that we are doing a specific legislative review at this point."

Whitehouse was flabbergasted, saying intelligence agencies and law enforcement had warned it would happen again, and he asked why no executive branch officials had been addressing cybersecurity.

"The silence has been deafening," Whitehouse said. "If you could just get me the name of a person at the Department of Justice to work with the Senate on cybersecurity legislation, I think that would help move things."

He listed a series of letters on the issue that have gone unanswered, and Sessions said he hadn't been able to get deputies confirmed and offered to have an attorney brief Whitehouse on specific cases.

"I'm up to speed on that side," Whitehouse said. "The issue is, there are things we need to fix legislatively on cybersecurity, and at the moment I can't find a point of entry into this administration of anybody who is working on cybersecurity legislation. So that's the person that I need -- about legislation and not just an update on cases. I'm pretty familiar with that stuff."