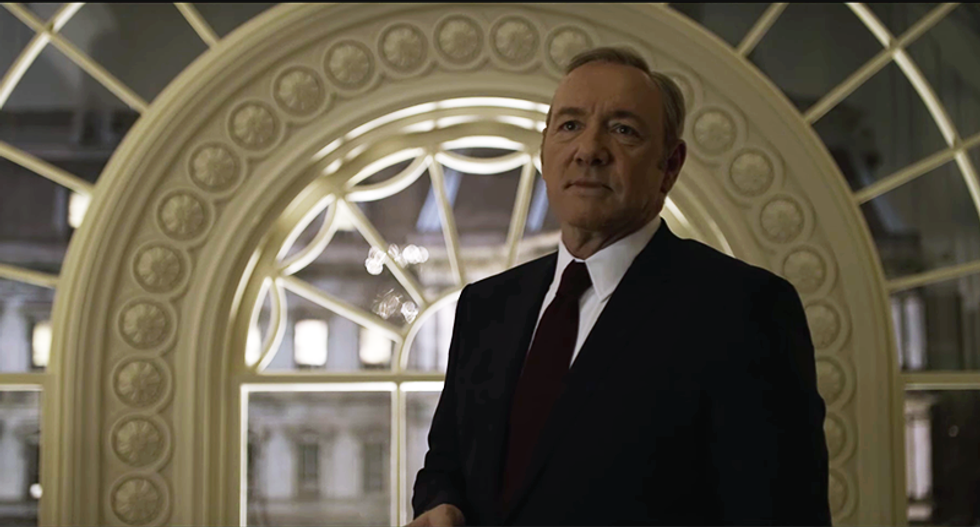 An operative for the Russian effort to meddle in the 2016 U.S. election said that he and his compatriots were required to watch the Netflix series "House of Cards" as part of their preparation for the attack.

Yahoo News reported Sunday night that the Russian opposition TV network Rain interviewed a hacker known as "Maksim" who worked on the Kremlin's notorious St. Petersburg "troll farm," where cyber operatives carried out a variety of attacks on the U.S. -- from hacking state electoral networks to "bot" personas on Facebook and Twitter.

According to Maksim -- who was interviewed with his face obscured -- he and others were trained in how to "set up Americans against their own government" and that part of that training included watching "House of Cards" in English.

“At first we were forced to watch the ‘House of Cards’ in English,” said Maksim, in order to understand U.S. politics. "It was necessary to know all the main problems of the United States of America. Tax problems, the problem of gays, sexual minorities, weapons.”

He continued, "You were given a list of media that you had to monitor and comment on -- New York Times, Washington Post” and ordered to read through thousands of comments.

“It was necessary to look through all this and understand the general trend, what people were writing about, what they are arguing about,” he explained. “And then get into the dispute yourself to kindle it, try to rock the boat.”

The operatives were instructed to spread a message against Democratic candidate Hillary Clinton, Maksim said.

“The main message is: Are not you, my American brothers, tired of the Clintons?" he said, adding that the trolls were instructed to harp on Clinton's "scandals" and sow discord.

"We had a goal to set up the Americans against their own government,” he said. “To cause unrest, cause discontent [and] lower [President] Obama’s rating.”

The Hill said, "Facebook revealed earlier this month that $10 million users saw political ads purchased by Russian actors during the 2016 election, and Russia-linked groups attempted to use Facebook to organize several pro-Trump rallies in Florida."

Special Counsel Robert Mueller is investigating Russian election meddling and trying to establish whether the Trump campaign colluded with Russian operatives to win the election.

Yahoo said that Rain TV believe that Maksim is genuine because "he was able to produce documents showing that he worked for about a year at the Internet Research Agency, the former name of a media conglomerate that is believed to be owned by Evgeny Progozhin, a wealthy oligarch and restaurateur who is widely known as 'Putin’s chef.'”