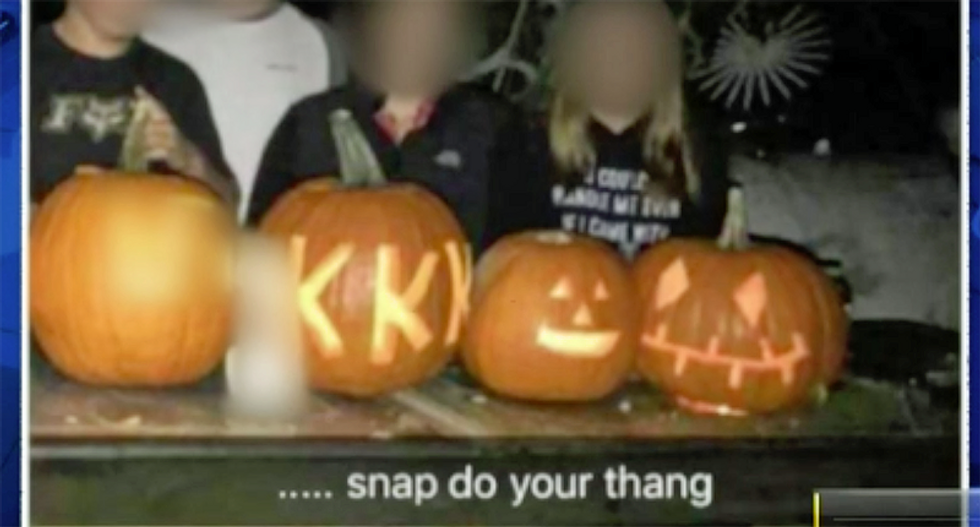 Students from the Coatesville Area High School proudly posed with jack-o-lanterns that included 'KKK' and a swastika carved into pumpkins.

Students at a Pennsylvania high school were caught bragging on social media after carving Jack-'o-lanterns with 'KKK' and a Nazi swastika.

"We are extremely disappointed that any of our students would display this kind of hatred and vile behavior," the Coatesville Area School District said in a statement published by ABC 6. "It's reprehensible and intolerable, and this photo causes deep sadness and concern."

"This behavior is reprehensible," said Coatesville Area High School Principal Michele Snyder, less than one week ago, about an entirely different incident.

Coatesville Superintendent Cathy Taschner wrote a letter to parents Thursday about the last case of reprehensible behavior, the Daily Local News reported. That was to warn parents of a threat from a community activist who was livid after Superintendent Taschner claimed a baby black doll hanged by the cross country team "was a foolish prank and the intent was not to cause racial intimidation."

The town's newspaper explained the threat.

"In a video obtained by the Daily Local News, the community activist begins by saying that the school district officials sent out statements to explain the situation regarding the doll and that they 'only care how they look' and noted that there was a delay in the investigation. He says in the video that everyone on the cross country team should be kicked off for claiming they were going to use the doll as their mascot," Daily Local News reported. "He further makes a comment about the team, his dog and a weapon, but then he says he doesn’t mean that and that he doesn’t have a dog or a gun. He later apologized and said that it was ill-worded."

These are not the only recent problems in the schools of Coatesville, a town of 13,000 west of Philadelphia.

“All should have whatever first names they want… then last name is N*GGER!” one message allegedly read. “Leroy N*gger, Preacher N*gger, Night train n*gger, clarence n*gger, Latoya n*gger, Thelma n*gger and so on.”

Another message allegedly stated that there was “no f*cking way that ape banged that white piece? WTF is going on with these white pieces taking n*gger cock! Me no understand!”

Students tried to protest the latest scandal, but school security prevented them from a planned walk out, NBC Philadelphia reported. Several angry protesters stood outside the high school Wednesday, with signs reading 'not funny' and 'it's not a joke!'