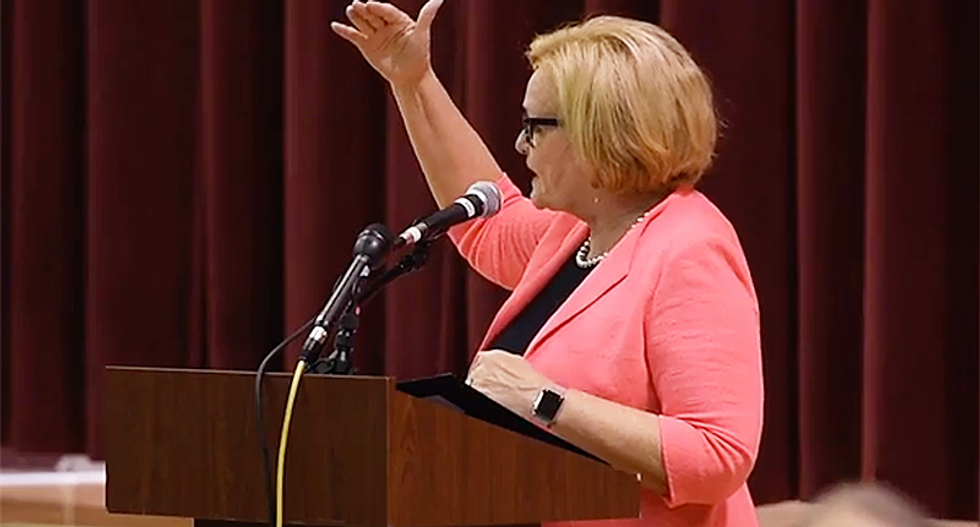 The economic experiment in Kansas brought by tea party Gov. Sam Brownback cut taxes so significantly that the government spiraled into disaster. Jobs reports for the state have been horrible. The S&P downgraded the credit rating of the state twice and the results have been so humiliating, Brownback has been caught trying to hide reports that reveal his failure. Brownback has since been overruled by his own GOP legislature trying to fix the problem and sales taxes have been increased to salvage what's left of Kansas.

Now, one Missouri senator is warning that those very same policies that destroyed the Kansas economy are coming to the rest of the United States if President Donald Trump's tax plan is passed, the Kansas City Star reported.

During a town hall, Sen. Claire McCaskill (D-MO) said that tax cuts for the rich is the last thing that should be done while the economy is still working it's way back from a depression. The tactic, she explained, to reduce income tax on pass-through businesses is “particularly egregious.”

“Does anyone know what ‘pass-through’ actually is?” McCaskill asked the town hall crowd. “See, I think they’re counting on that.”

She explained that most businesses are set up as "pass-through entities" or limited liability companies or S-corporations. It means the profits from the business pass through directly to the business owner.

“The pass-throughs are every lawyer you know. Every doctor you know... Every real estate deal is a different LLC," she continued. "Now under the law, the LLCs pay whatever that individual’s tax rate is. So if there’s somebody who’s very wealthy, like a lawyer or a doctor, the pass-through income is taxed at whatever his income tax would be."

Currently, business owners pay 39.6 percent in taxes but the Republican plan would drop that to 25 percent. McCaskill said that this would help wealthy business owners, not the everyday small businesses on Main Street.

McCaskill knows this tactic well, possibly because it's one her own husband uses with dozens of LLCs, The Star reported, citing her financial disclosure forms.

“No question my family would benefit from this tax plan, but my family doesn’t need a tax cut,” she said. “In fact, my family should be paying more in taxes.”

Kansans should be familiar with the policy because Brownback's plan eliminated income taxes entirely for pass-through business owners in 2012. More than 300,000 business owners paid no state taxes on their income, unless they received a salary from the company. Less than 1 percent of business owners in Kansas make more than $500,000, however, that small percentage makes up 40 percent of the total tax revenue in the state.

“The experiment in Kansas has been termed a disaster just about everywhere, including Kansas,” McCaskill told the crowd. “I think Kansas should be a cautionary tale for the folks in Washington who are pushing this plan.”

It's one thing many Republicans and Democrats in the Midwest agree on.

“Yes, Kansas should be used as a cautionary tale,” said Republican state Rep. Melissa Rooker. While in office she said that the state made cut after cut to government spending before the collapse was so bad they ditched the Brownback plan.

“Anyone who wants to dismiss Kansas as some sort of an anomaly is kidding themselves," she said. "And it worries me not just to see similar ideas proposed ... but a rather broken process at the federal level.”

She also said that proponents of the bill oversold the growth the cuts would create and proper vetting into the plan wasn't done. She hopes federal lawmakers don't make the same mistakes Kansas legislators did in 2012.

Republican state Rep. Stephanie Clayton also agrees with McCaskill and warned that Kansas should be a cautionary tale.

“Hearing some of the rhetoric at the national level that’s being used to push this seems eerily familiar. It’s like, ‘Hey, I remember this,’” she said.

Clayton went on to explain that Kansas was five years ahead of Congress in understanding the absurdity of cutting the taxes of the pass-through businesses.

She was amazed the state's Congressional delegation supports the tax plan after watching what happened to Kansas.

“They seem to be saying this is different and everything is fine. I guess, bless their hearts, they’ve just spent too much time back east,” she said. “Their own electorate has been against these tax cuts.”

"I think there are a lot of things about President Trump that Missourians liked in terms of him being different," McCaskill said. "The notion that maybe he could go up there and fight for the middle class. As it turns out, this tax plan is not about the middle class. It's about Donald Trump's wealthy friends."

Brownback has joined the Trump administration as a religious ambassador.

Watch McCaskill in the video below:

A New York man pleaded guilty today in federal court to a felony charge in connection with the theft of a laptop from House Speaker Nancy Pelosi’s office during the January 6 Capitol riot.

Legal experts: Trump's attempt to whitewash his call to 'terminate' the Constitution only makes it worse

Lawrence O'Donnell began his Monday night show highlighting Donald. Trump's recent flub on his personal social media site in which he advocates terminating all rules and laws, even those in the Constitution just to make him president after losing in 2020.

Among the problems that O'Donnell saw in Trump's post, other than the obvious political and PR disaster that has followed, is that it would give a prosecutor in the Jan. 6 case the option to ask if Trump ever advocated terminating the Constitution. Since the post, Trump has tried to clean up the comments, but ultimately, the post is still live, and he ultimately doubled down on the idea using different words.

Despite major tech layoffs and ongoing fears of a recession, unemployment in the US remains low. In the long term, businesses are likely to continue to struggle to fill positions. That creates an opportunity for unions. And there are encouraging signs that workers are seizing the moment.

There’s no doubt that the economy is slowing, with ugly consequences for some workers. Tech companies have been laying off employees at a brutal rate. Amazon plans to lay off about 10,000 workers. Hewlett-Packard has announced plans to lay off 4,000 to 5,000 people in the next few years.