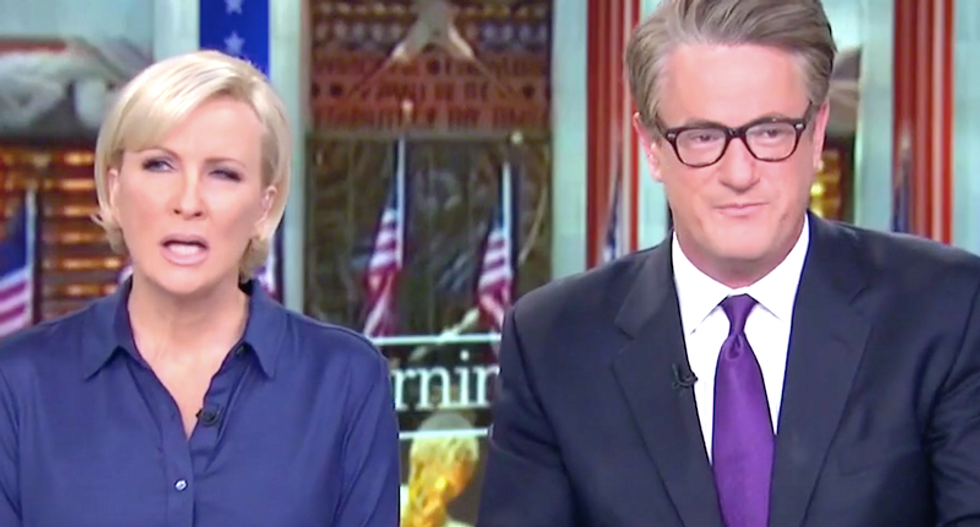 MSNBC's Joe Scarborough and Mika Brzezinski ripped Melania Trump's hypocrisy for campaigning against cyberbullying without challenging her husband -- the world's most famous cyberbully.

The first lady visited a Michigan elementary school Monday to talk to students about online bullies, and the New York Times reported that she's aware of criticism directed at her campaign in light of President Donald Trump's social media activity.

"If you are going to pick anything, that's an interesting thing for Melania to pick considering, well, I mean, all the insults," Scarborough said. "He's constantly cyber bullying. Really? That's fascinating, you have, remember the beauty queen he said was fat, and 'Liddle' Bob Corker, 'Little' Marco (Rubio) -- he makes fun of people for being small."

The "Morning Joe" hosts have themselves been targeted by the president's social media taunts and threats -- and they recalled Melania Trump's response when her husband mocked Brezizinski's looks.

"She attacked me, actually," Brezinski said, as she and her co-host laughed about the president's insulting tweets against them.

Co-host Willie Geist said the first lady's efforts showed an "obvious level of hypocrisy," but he said she had chosen an important issue to address.

"Maybe she should start with Patient X, or Patient Zero, (who) she sleeps actually with, the worst bully in America," Scarborough said.

MSNBC political analyst Mark Halperin said he doubted historians would spend much time on Melania Trump's hypocrisy on cyberbullying -- but Scarborough said it was an important example of the administration's lack of credibility.

He said everyone who's served under the president had seen their credibility destroyed, and he believed the first lady's glaringly obvious hypocrisy was important.

"If you really want to know something that best encapsulates the hypocrisy and how Donald Trump destroys all who are close to him, this cyberbullying, or bullying campaign, epitomizes it best because he has coarsened all of American culture and actually put bullying in the front of everybody's minds," Scarborough said.

Halperin agreed, but said it paled in comparison to North Korea or health care -- and Scarborough said Melania Trump's credibility was relevant to both those issues.