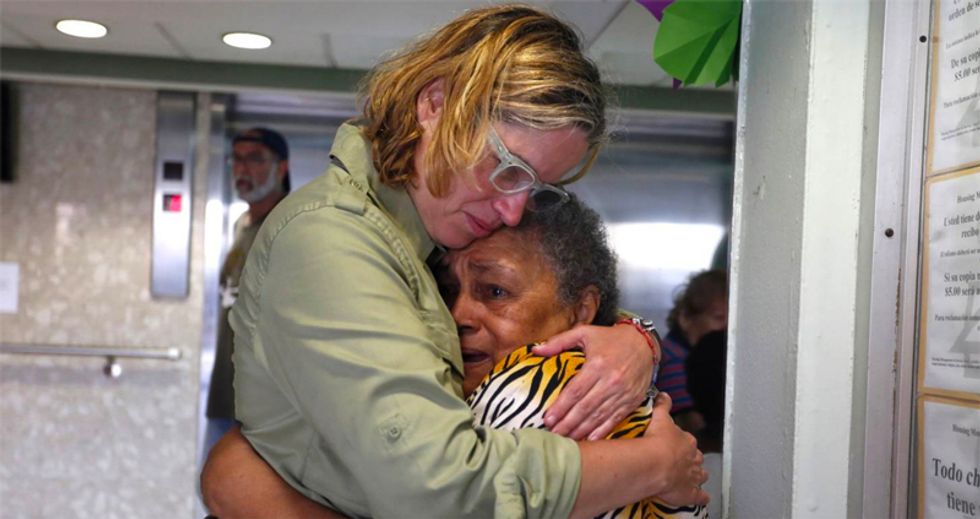 After her lambasting of President Donald Trump on Twitter, San Juan Mayor Carmen Yulín Cruz issued an incendiary press statement in which she called for international agencies to intervene in Puerto Rico, where the federal response to Hurricane Maria is escalating into a humanitarian emergency.

NBC News published the one-page statement, in which Yulín called on the United Nations and UNICEF to "stop the genocide" and bring "drinkable water, food and medicine" to the U.S. territory, which has suffered mightily in the wake of Hurricanes Irma and Maria.

The president's cavalier attitude and threats of withdrawing aid Puerto Rico, said Yulín Cruz, "seem to be taken out of a book about how to add insult to injury." She accused Trump of being "incapable of empathy" and said he is "frankly simply cannot the job done."

"I ask every American that has love, and not hate in their hearts, to stand with Puerto Rico and let this president know WE WILL NOT BE LEFT TO DIE. I ask the United Nations and UNICEF and the world to stand with the people of Puerto Rico and stop the genocide that will result from the lack of appropriate action of a president that just does not get it because he has been incapable of looking in our eyes and seeing the pride that burns fiercely in our hearts and souls."

Trump tweeted on Thursday morning that the country "cannot keep FEMA, the Military & the First Responders, who have been amazing (under the most difficult circumstances) in P.R. forever!"

Yulín Cruz tweeted back that the comments would be more appropriate coming from a "Hater in Chief" and said, "Shame on you!" for the president's lead-footed, tone deaf responses to the crisis.

Republican strategist Rick Wilson said that Trump doesn't care about Puerto Rico because he thinks of its people as "Sea Mexicans" and not actual Americans.

As FEMA has failed to deliver water to the furthest reaches of the devastated island, desperate residents have resorted to drinking the toxic water from contaminated "Superfund" sites. As Rachel Maddow noted on Wednesday night, the first deaths from treatable water-borne diseases have begun.