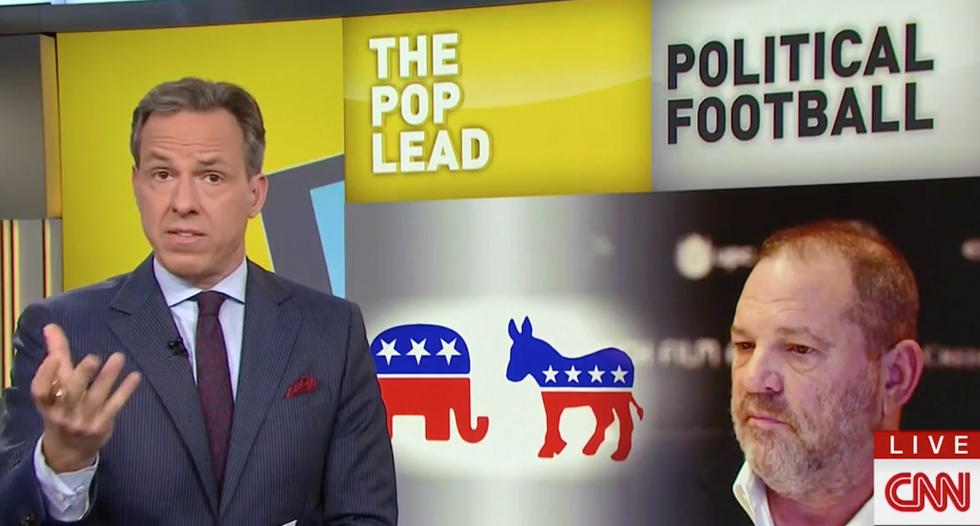 CNN’s Jake Tapper on Tuesday made it very clear where he stand on the issue of sexual assault, namely that no man, no matter how powerful, is exempt from being called out for their misconduct.

Tapper was discussing new allegations regarding Hollywood producer Harvey Weinstein, whose reputation for using his position of power to demand sex from young women became a national scandal this past week when two exposées in the New York Times and the New Yorker detailed his horrific conduct. The CNN host also pointed out that Weinstein is far from the first powerful man to use his status as leverage to demand sex acts from women. Trump, the president of the United States, has been accused of sexual harassment by at least 11 women (on the record), Tapper noted.

“Those who express outrage at one sexual harasser and not another because of the first harasser's political views, that is morally bankrupt,” Tapper explained. “This is a point made, interestingly enough, by Fox News anchor Sean Hannity last night, saying the left has this ‘selective moral outrage.’ It's a cogent point, except that very same Sean Hannity hosted sexual harasser Bill O'Reilly on his show two weeks ago. O'Reilly, of course, was fired from Fox News channel after an investigation into multiple allegations of sexual harassment, including multiple settlements.”

“Look, this shouldn't be hard, and it shouldn't be partisan,” Tapper continued. “It doesn't matter if it's Harvey Weinstein or Donald Trump or Roger Ailes or Bill Cosby or Bill O'Reilly or Bill Clinton. These accusations are all worthy of reporting and outrage. You don't get to pick and choose which ones you find valid and outrageous based on political party.”

“Isn't that funny? Her dad's a sexual predator,” Tapper said.

Watch the takedown below, via CNN: