'That is wrong': McCain whacks Trump over 'bone spur' excuse to dodge the Vietnam draft 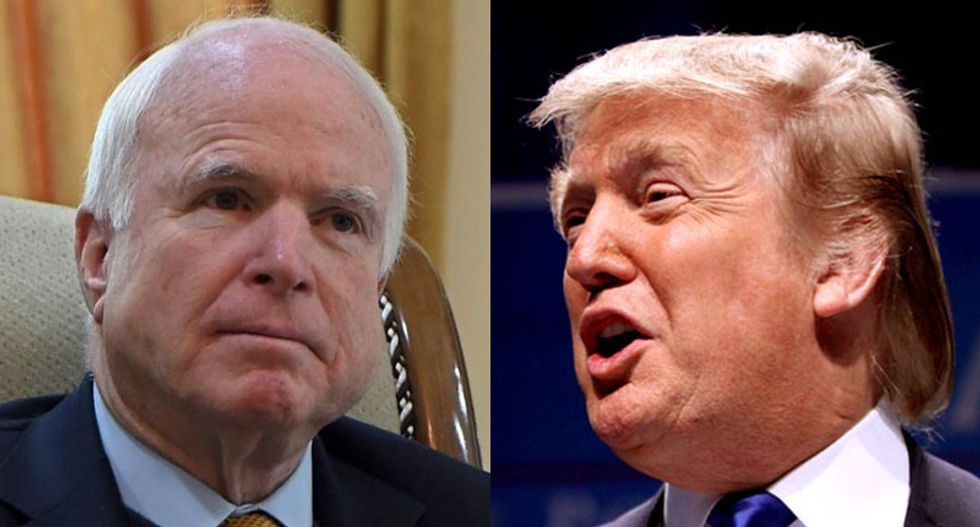 Sen. John McCain (R-AZ) swatted President Donald Trump during an interview about the Vietnam War on Sunday -- without ever mentioning the former reality TV game show host by name.

The Hill said that McCain was speaking to C-SPAN3's "American History TV" when he said that his main regret about the Vietnam draft was that it disproportionately affected poor Americans who couldn't afford to buy their way out of serving.

“One aspect of the (Vietnam) conflict by the way that I will never ever countenance is that we drafted the lowest income level of America and the highest income level found a doctor that would say that they had a bone spur,” McCain -- a former Navy pilot -- said. “That is wrong. That is wrong. If we are going to ask every American to serve, every American should serve.”

McCain -- son of a Navy admiral -- was shot down and captured in Vietnam and spent more than five years as a prisoner of war. The young McCain was offered the opportunity to walk free if he would denounce the U.S. and leave his fellow prisoners behind. He refused and endured two more years of imprisonment, beatings and torture that left him with permanent injuries.

Donald Trump -- the son of a millionaire -- received five medical deferments from the draft due to a doctor's note diagnosing him with bone spurs.

The two men have gone back and forth over the course of Trump's presidency, with Trump calling into question the valor of McCain's service and threatening to "fight back" against the Arizona senator's criticisms.

McCain responded to Trump's threats by saying, "I've faced greater challenged than this."