Trump slams NFL for not making players stand for anthem 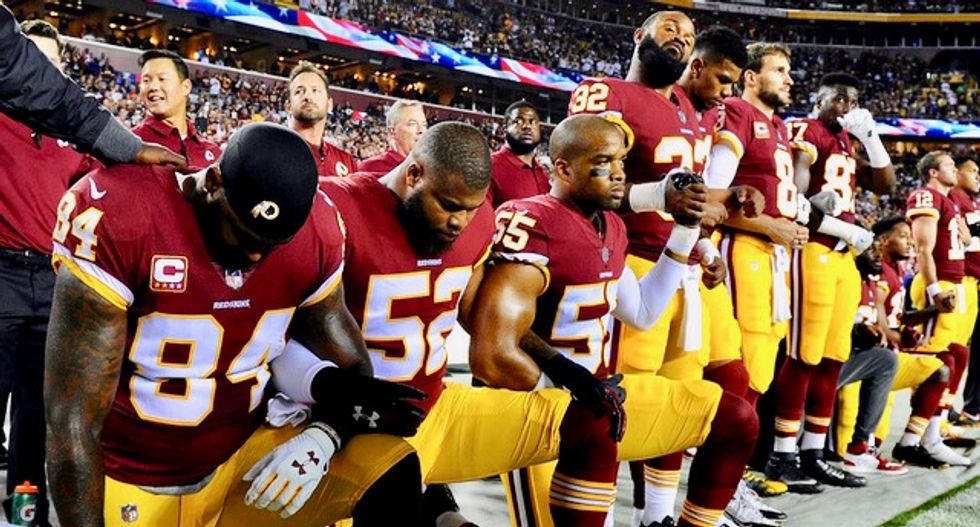 U.S. President Donald Trump criticized the National Football League on Wednesday for not forcing players to stand for the national anthem, firing back after league officials meeting in New York chose instead to effectively back players' right to political activism.

"Total disrespect for our great country!" tweeted Trump, who has repeatedly denounced players in the country's most popular sports league as unpatriotic for kneeling during the anthem in a demonstration against racism.

After the first day of the NFL's two-day autumn meeting of team owners, players and their union's leaders in Manhattan, NFL Commissioner Roger Goodell told reporters they talked about "the issues that our players have been trying to bring attention to. About issues in our communities to make our communities better."

The small but growing number of players kneeling during the national anthem are protesting the killing by police of unarmed black men and boys across the United States, as well as racial disparities in the criminal justice system. More than half of all NFL players are black.

Trump wants the league to suspend players if they kneel during pregame renditions of "The Star-Spangled Banner." His vice president, Mike Pence, walked out of a stadium in Indianapolis this month as players knelt, which Trump said he had instructed Pence to do.

On Tuesday, Goodell appeared less interested in stifling the protests, despite the president's views, and rather hailed the character of the players, saying that he wanted to help their political activism.

The commissioner said the league will meet again with players, probably in the next two weeks, and spend more time talking to reporters when the gathering concludes on Wednesday.

(Additional reporting by Susan Heavey in Washington and Frank Pingue in Toronto; Editing by Daniel Wallis and Bill Rigby)