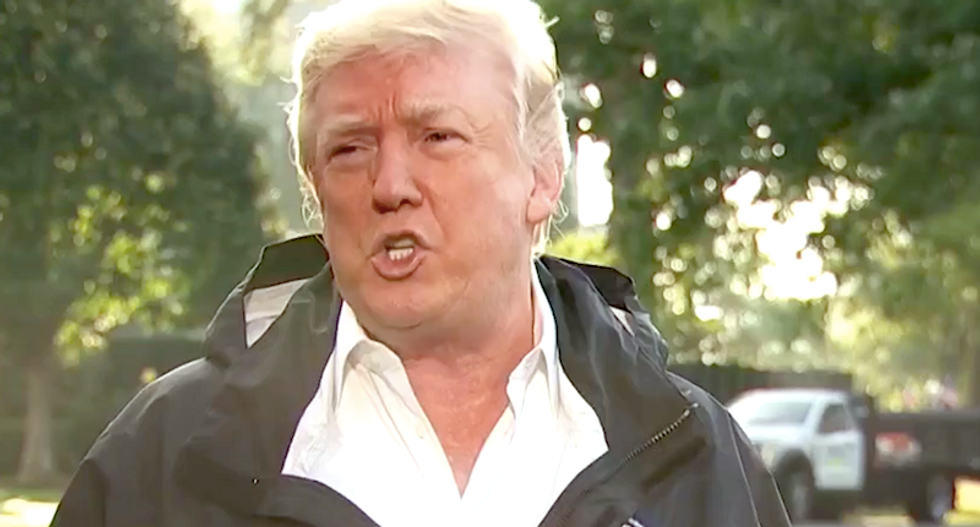 President Donald Trump again complained Puerto Ricans weren't doing enough to assist in relief efforts ahead of his visit to the hurricane-ravaged island.

Before leaving for a tour of the U.S. territory, Trump said Puerto Rico was on its way back after Hurricane Maria cut a path of destruction nearly two weeks ago -- but he asked for more help from storm victims.

"In Texas and in Florida we get an A+, and I'll tell you what, I think we've done just as good in Puerto Rico, and it's actually a much tougher situation," Trump said. "But now the roads are cleared, communications are starting to come back."

Trump called out truckers in Puerto Rico as not helpful enough, which may have been based on false reports from right-wing blogs that the island's Teamsters union had gone on strike.

"We need their truck drivers, their drivers have to start driving trucks," Trump said. "We have to do that, so at a local level they have to give us more help. I will tell you the first responders, the military, FEMA, they have done an incredible job in Puerto Rico, and whether it's (the San Juan mayor) or anybody else, they're all starting to say it. I appreciate very much the governor and his comments. He has said we have done an incredible job and that's the truth."

The president responded to heavy criticism over the weekend by attacking the San Juan mayor on Twitter, saying she and other leaders were unable to get Puerto Ricans to help themselves recover from the devastation.