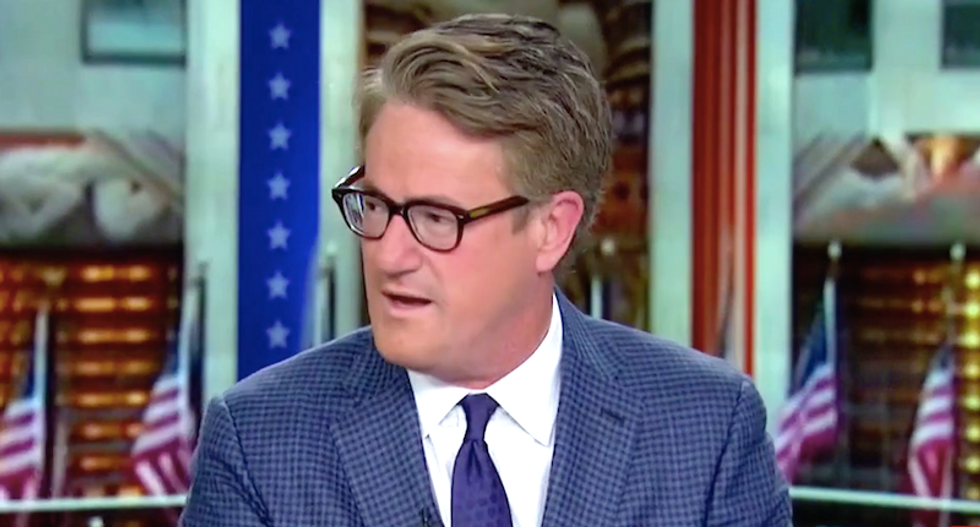 MSNBC's Joe Scarborough said he reached something of a breaking point after President Donald Trump politicized the death of John Kelly's son and offended the widow of another slain serviceman.

The "Morning Joe" host said he has nearly run out of emotions to react to the president's "shocking, depressing and disappointing" behavior, and he can only conclude that Trump wants the public to constantly feel "shocked and outraged."

"Donald Trump took a question about him not recognizing the sacrifice of four Americans and turned it into an entire news cycle of fact checking and fights and battles," Scarborough said, "and in the process, did something -- and I say this without emotion, utterly despicable regarding John Kelly's dead son, and now it's put John Kelly in a position where I don't know how he continues without an explanation of how Donald Trump, the man he works for, uses his son's death as a political, just as a political throwaway line. That's what he did -- there's no mistaking it. He used the Kelly family's horrific loss, just as a political throw away line on talk radio."

He was even more disgusted by the president's thoughtless treatment of the widow of Sgt. David Johnson, who was killed Oct. 4 with three other soldiers when their unit was ambushed by terrorists in Niger.

The MSNBC host was also baffled by the president's threats against Sen. John McCain (R-AZ), who criticized Trump in a speech this week despite battling brain cancer.

Scarborough, who has known Trump for years, said the president cares only that he dominates political and cultural life.

"Mika (Brzezinski) and I were walking out of a restaurant a couple weeks ago," he said. "We heard people at every table talking about Trump -- none of it was positive, none of it was positive. Everybody was concerned, everybody was nervous. This was in a Republican area, by the way. We get out of the restaurant, and I turn to her and I said, 'You know, he doesn't care that everybody in there thinks he is destroying America. The only thing he cares about is that they're talking about him."