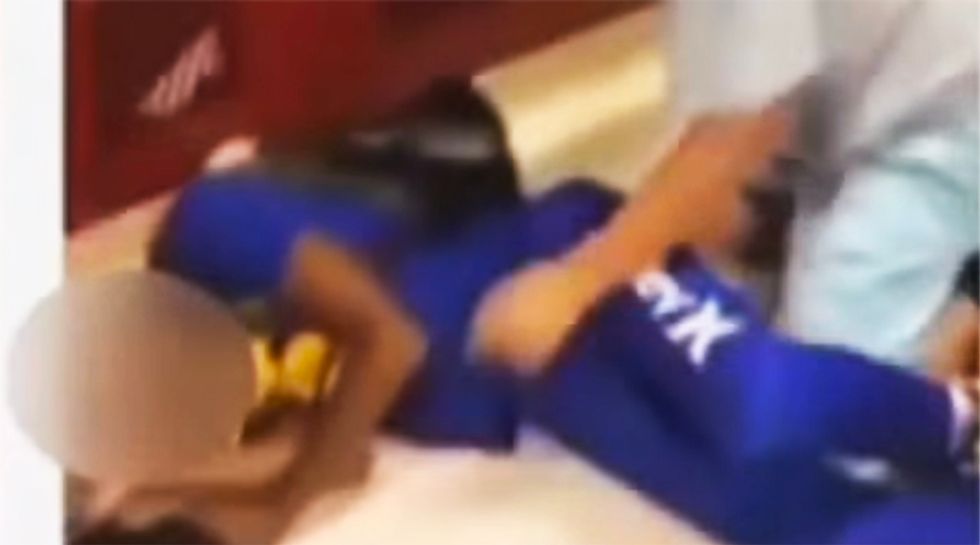 Police in Short Pump, Virginia are investigating a Snapchat video showing local white middle school football players faking raping African American students while yelling they are 'f*cking the black out of them."

According to KSLA, police were alerted to the video that showed the athletes grabbing several black students, forcing them to the ground and faking raping them while yelling slurs.

In the video -- entitled "Ever wonder what happens in the football locker room?" --one white student can be heard saying, "What’s up with you and the blacks?"

"What’s going on? He's f*cking a black,” another student replied.

In text added to the video, another student added, "We gonna f*ck the black outta these African-American children from Uganda.”

According to one parent, who didn't wish to be identified to protect her son, the black students were forced to participate and pleaded to be let go.

"You see kids in the locker room forcing kids over the bench. You see kids on the ground thrusting on other kids making racial slurs as they're thrusting …You see the kids asking to get up and to stop and screaming,” she said.

According to a spokesperson for the school district, authorities are taking the video very seriously and have called in the police.

“We are aware of the video, the contents of which are offensive and wrong. The school division will take appropriate action in accordance with our normal procedures. Beyond that, federal law prohibits school divisions from sharing additional information about students,” said Henrico Schools Spokesman Andy Jenks.

"If I was one of the parents and my kid was pinned on the ground, I'd be angry,” Henrico Supervisor Tyrone Nelson explained, but questioned whether it was racially motivated, saying, “Was this some kind of racial situation? If it's young kids being held against their will and being sexually manipulated, then that's one thing.”

“They were not okay with it,” the parent said referring to her child and another student who was also assaulted. "He had people that were straddling over on top of him."

“Racism should not be tolerated … You should be able to send your kids to school and feel they are being protected and safe,” she added.