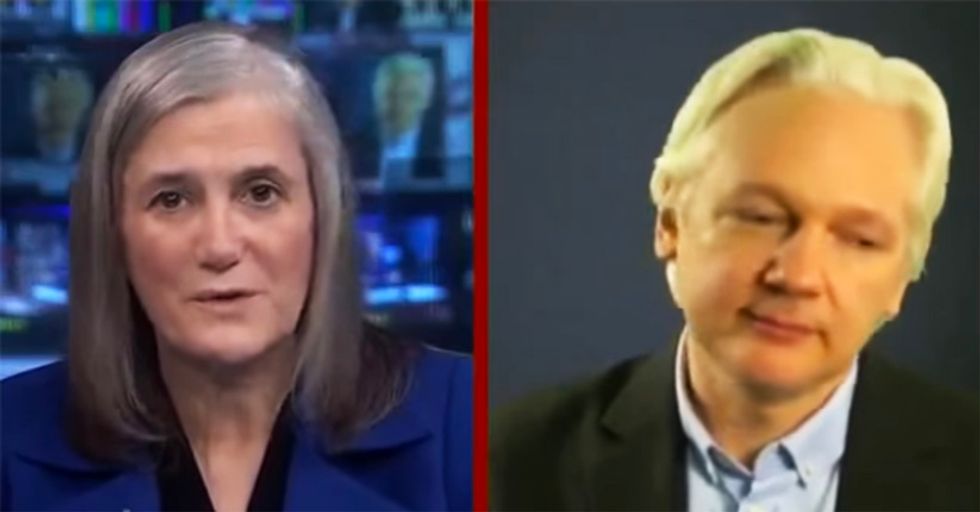 In what grew to be a contentious interview with Julian Assange, Democracy Now's Amy Goodman grilled the Wikileaks founder over his connections to the Trump campaign via Trump associate Roger Stone.

"Julian Assange, I wanted to ask you about Roger Stone. In March of 2016, he posted on Facebook that he, quote, 'never denied that Assange and I had a mutual friend who told me Wikileaks had the goods on HRC' — that’s Hillary Rodham Clinton— 'and would begin disclosures in Oct. He did and they did. I didn’t admit it- I announced it,'" Goodman asked. "I now wanted to talk about the latest, Roger Stone going to testify before the Senate Intelligence Committee and what came out of that. Your response to that?"

"Roger Stone has been trolling Democrats all his life," Assange deferred. "And he’s doing exactly the same thing, in order to elevate his profile. That’s all. You can look at our statements at the time. He didn’t say anything that I hadn’t been saying in public at the time."

"So, let me turn to Democratic Congressman Adam Schiff speaking at a hearing of the House.." Goodman attempted as the Wikileaks founder cut her off.

"I would just say that the effectiveness of that trolling just shows you how mad the U.S. political culture has become,"Assange insisted. "Is Roger Stone presented as a credible character in his statements? Is that a credible person? Do Democrats think that he’s credible?"

"Well, I think the issue is his closeness to Trump. And whether or not you think Trump or Roger Stone is credible, the --" Goodman tried before being interrupted again.

Sharing a clip of Stone saying he would share the name of his go-between with Wikileaks, Goodman asked, "Now, of course, Roger Stone isn’t a journalist, but what is your response to what he’s saying right here, that there was an intermediary between you and him, who was a journalist?"

"That the United States’ political culture has gone mad."Assange said defensively before attacking Goodman and saying, "Roger Stone is trolling epically the Democratic political class in order to elevate his profile. And it’s sad to see that Democracy Now. is buying into it."