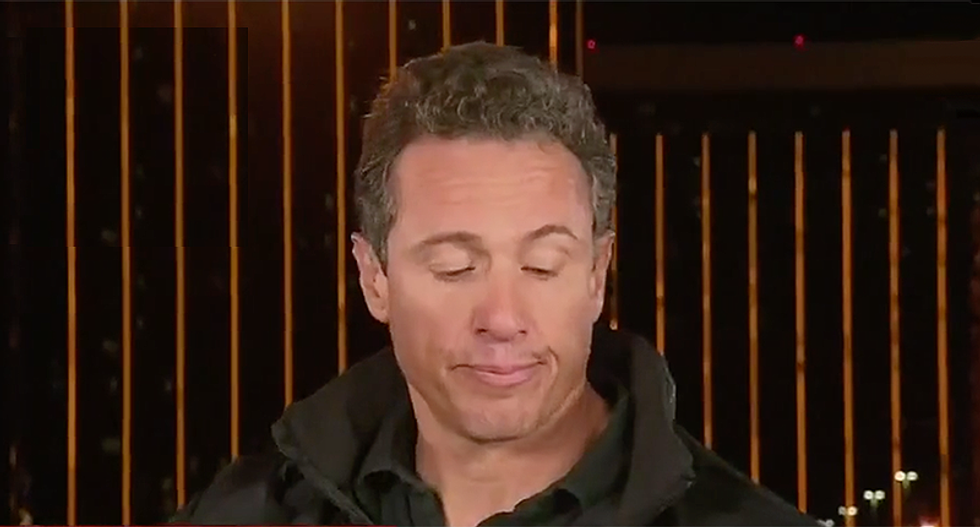 As CNN's Chris Cuomo stared into the faces of the survivors of the Las Vegas massacre his voice cracked. Lawyer Brian Claypool decided to stay in Las Vegas one more day and changed his flight so he could watch the concert. That single decision changed his life forever.

Claypool explained to Cuomo that he feels guilty and he's been trying to avoid looking at photos of people who were killed.

"They were a lot younger than me," he continued. "They don't get to go home. I get to go home today, back to see my daughter. I feel a little guilty. I've heard of heroic acts and I'm wondering, did I do enough? So, I'm going through some guilt now. Did I help enough people? Everyone was screaming. They didn't know what to do. They didn't know where the shooter was."

He gathered that he was in an area out of range of the shooter where people weren't being shot.

"I have to go the rest of my life wondering why did some of these people die? Why didn't I?" he asked.

Cuomo cut in to say that dealing with issues like this are hard but that he must move forward.

"One of the things we know, because we've been bathed in so many of these events is there is only one person to blame for anything that went wrong, and it ain't you, my brother," Cuomo said, his voice cracking. "It is that monster who decided that somehow ending his life had to be connected to ending other people's lives. Everything you did was more than what you should have been expected to do and you've got to tell yourself that. What did you survive and what you do now are all beautiful challenges for you to take on now and pass on to your daughter. But don't spend a moment thinking that you were in any way were in the wrong in a situation like that."

Claypool said that he wanted everyone to know how beautiful everyone was at the festival. "That's what hurts the most," he said. "Everybody there was just celebrating life. Taking a break from the everyday grind and struggles. Such a beautiful crowd."

"We've heard it before and it's always trite until it's true, which is: everything happens for a reason. And I don't have the answers," Cuomo continued, beginning to cry. "It's hard enough for me to come up with the questions after so many of these events that we see again and again and we meet with the same frustrations. But for people like you, there is a blessing in these kinds of situations but you have to figure out what that is. While you've been talking, it's such a relatable experience."

Cuomo then introduced Lisa Fine, who was in the VIP section of the concert and hid under the bleachers. She turned her camera phone to the crowd and never stopped shooting.

"You were sitting there staring through your cell phone, worried that this was the last thing your kid sees," Cuomo said as his voice cracked again. "But she'll see you, and now you have that going for you."

Fine explained that she is heartbroken, saying that it's hard to even think about it because "it hurts so bad." She called the city "the Disneyland for adults" and sobbed that she knows the people she walked by on The Strip during her trip were people who probably died.

"Something has got to change," she said.

Watch the full conversation with the two survivors below:

WATCH: Cuomo chokes up as Las Vegas survivors... by sarahburris