WATCH: Off-duty cop beats accused shoplifter with baton -- but black man paid for all his items 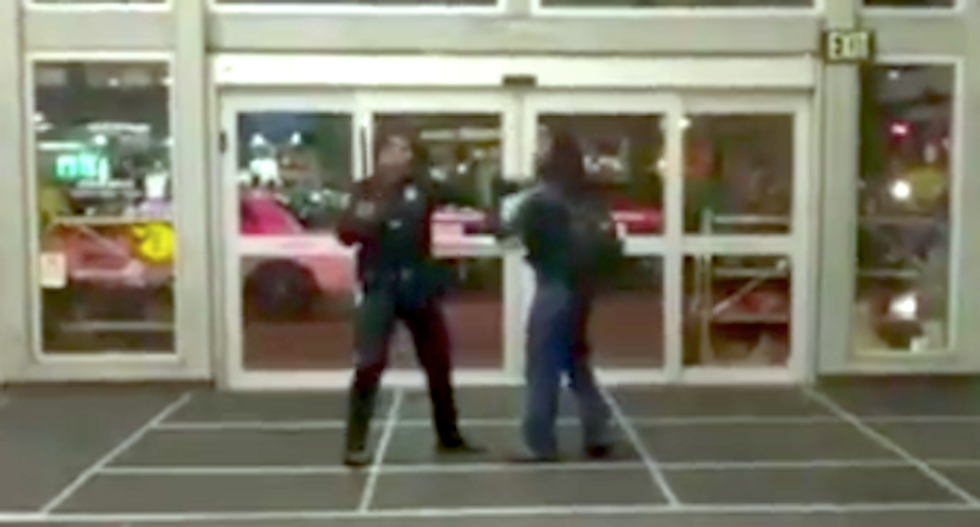 An off-duty Detroit police officer beat an accused shoplifter with a baton outside a grocery store -- but the man and his girlfriend were innocent.

David Bivins and his girlfriend were stopped by loss prevention Sunday night as they left a Meijer store, so she went back inside with their items, reported WDIV-TV.

She told the TV station they'd brought items from another store into Meijer but took care to keep the bags separate as they shopped, and security guards determined the couple hadn't stolen anything.

But when the girlfriend came back outside, she found the 23-year-old Bivins being beaten by the off-duty officer, who is also black.

The girlfriend said they were embarrassed by the accusations, and Bivins used profanity toward the off-duty officer, who threatened to arrest him for disorderly conduct.

Bivins then refused to turn around to be handcuffed, and the officer struck him three times with a baton, which the two men began to struggle over, reported the Detroit Free Press.

A bystander recorded video of the encounter as witnesses begged the 65-year-old officer, who was working as a paid security guard for the grocery, to stop hitting the younger man.

"Don't be f*cking with me!" yells the officer, a 39-year police veteran.

Bivins was treated for a broken tooth and facial bruising, and police then took him into custody on resisting and obstructing arrest and disorderly conduct.

Chief James Craig, of Detroit police, said the off-duty officer was in uniform, which is common practice while moonlighting, and subject to department rules and regulations.

But the chief, who is also black, said the officer was justified in using force because he feared for his safety.

"I can understand that, if you’re stopped and you’ve done nothing wrong, you’re going to be agitated," Craig said. "But this officer had the right to investigate, based on the information that was coming to him. So please, I would ask everyone, cooperate with us."

The incident remains under investigation by police.