'We have to take away the football': Ex-Bush ethics chief demands 25th Amendment before it's 'too late' 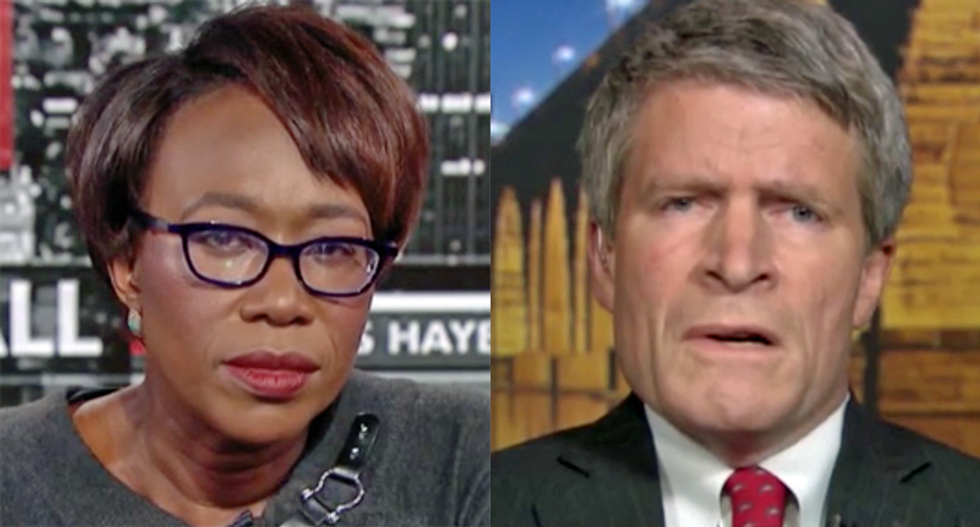 On Friday night, MSNBC anchor Joy Reid discussed the 25th Amendment, which is one of two legal mechanisms that can be utilized to to remove President Trump from office prior to the end of his term in January of 2021. Reid noted the president refusing to acknowledge Russian meddling in the 2016 presidential election.

"In fact, he'd rather tweet conspiracy theories, suggesting that if Russia intervened, they were in league with the party that lost," Reid noted, while displaying a tweet from the Commander in Chief.

Reid pointed to a piece Painter co-wrote with clinical psychologist Leanne Watt, Ph.D. on the topic of utilizing the 25th Amendment.

"Though remote, we cannot rule out the possibility that a president in a downward mental health spiral could destroy important global partnerships, alter centuries-old alliances and leave the United States vulnerable to terror attacks or war," Reid quoted from the particle.

"Make your case that it is appropriate to consider the 25th Amendment when Donald Trump is clearly not physically incapacitated, that we know of, and that there is no way to diagnose whether he is mentally incapacitated because no psychiatrist has treated him," Reid challenged.

"The other disorder we're very worried about is an extreme anti-social tendency, an inability to understand how other people feel," Painter explained. "We saw that last week in his dealings with the families of fallen soldiers."

"We saw that over the summer after Charlottesville. When you have racists running up and down the streets chanting death to the Jews and carrying swastikas and Confederate flags, that is a time for the president to understand how people feel about that and instead, he comes out and says, well, they're good people on both sides," Painter reminded.

"Now we've just seen that the Twitter machine is out of control...it's just patently absurd and to think someone who tweets that way, who thinks that way, talks that way is in control of nuclear weapons that could wipe out human civilization," Painter exclaimed. "This is very, very worrisome and that's why we have 25th Amendment."

Painter isn't just worried by recent statements, but said he concluded Trump was psychologically impaired by watching his campaign.

"The statements he made there in the campaign were psychologically imbalanced and if we have to wait around for a doctor to implement the 25th Amendment of the Constitution, it could be too late," Painter warned. "That's why we have the 25th Amendment, it was adopted in the 1960s in the nuclear age when we understood the dangers -- indeed, to human civilization -- if we had a president who's off his rocker."

"This is a very dangerous situation we confront right now. I'm fine with him on Twitter, but we have to take away the football," Painter concluded, referring to the device known as "the football" which would allow a president to launch nuclear war.

Watch Richard Painter, the S. Walter Richey Professor of Corporate Law at the University of Minnesota Law School, make the case for utilizing the 25th Amendment: