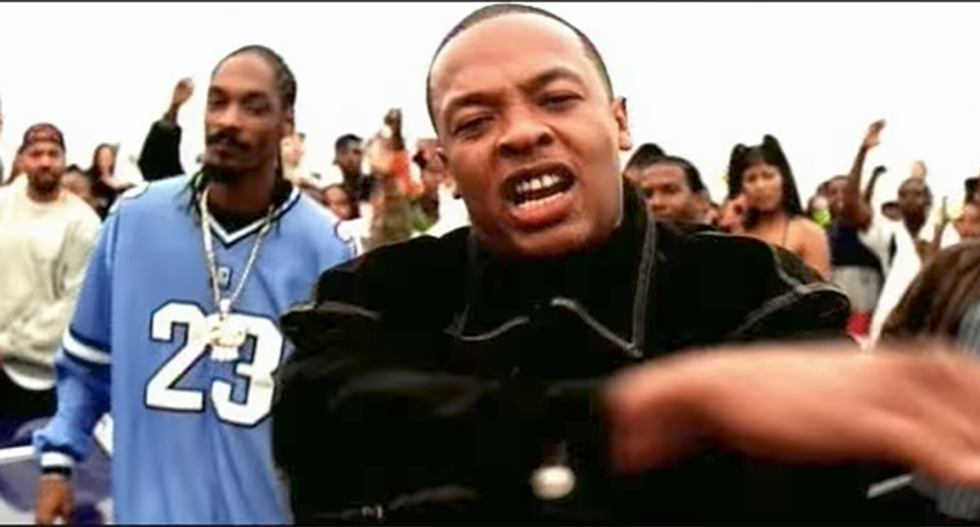 Activist Lance Cooper was inspired by the #MeToo campaign to start a campaign to not only stop the misogyny in rap music, but out sexual predators he said he knows exist in hip-hop.

After the "Access Hollywood" tape went live, BET writer KC Orcutt explained that his comments were far more triggering for her than most of the misogyny in rap music. She was literally grabbed by the genitals by a fellow student at her middle school after basketball practice.

"Years later, as a female hip-hop journalist, being alone in a room full of men equates with riding dolo to a rap show on a Tuesday night after work," she wrote in 2016. "We've all been 'that girl' at some point, and not once has it ever made me feel the way that Trump's 'locker room' talk has."

She admitted being conflicted about the lyrics that can objectify women, but somehow it was different than the president of the United States vocalizing the acceptability of what had happened to her.

"When our favorite rappers make certain comments about women on a track, we can shrug it off, say we don't condone it or simply skip over to the next," Orcutt continued. "However, when the president-elect both believes and broadcasts that he can do “anything” he “'wants' to a woman, it should not be avoided, ignored or excused. And because it already has been, that is what makes it so much worse."

She explained that rap lyrics can be "cringeworthy," citing Dr. Dre and Snoop Dogg's infamous rhyme "B*****s ain't s**t but h**s and tricks” as well as Eminem lyric "Slut, you think I won't choke no whore." They're different, to her, however. "Often, in their music, rappers are detailing consensual actions, often hypothetical, hypersexualized or exaggerated, whereas Trump’s commentary suggests behavior of straight-up rape in real life," she wrote.

Cooper disagrees, saying that where power exists, an abuse of power almost always exists as well.

"It's highly likely that most of the men in hip-hop have used their power as a weapon to silence someone they've sexually assaulted or harassed," he tweeted, but didn't cite specifics.

He went on to say that few in the rap industry are brave enough to expose the sexual predators that he knows exist in hip-hop.

"This is because rape culture and disrespecting women is an essential pillar in what rap has become. The sad part is, nobody cares," he tweeted. "I created #HerRapStory because nobody in hip-hop media or the industry had the courage to, and the many women/girls who've been raped, assaulted and harassed, by rappers and producers, deserve to be heard. It's long overdue, and now is the time to break the silence."

Orcutt wants to see the glorification of misogyny and objectification end and thinks it ultimately will. She don't see it happening with the president any time soon.

"The same cannot be said for a president whose behavior consistently encourages such a horrific perspective towards women to become the accepted norm," she wrote. "That is one of the many reasons why I'm terrified of what a Donald Trump presidency could mean for the Brock Turners of the country, all while triggering a part of my past that not even the filthiest of rap lyrics can stir up."