Alabama media company to Roy Moore: Go ahead, sue us -- we'd love to air your dirty laundry in court 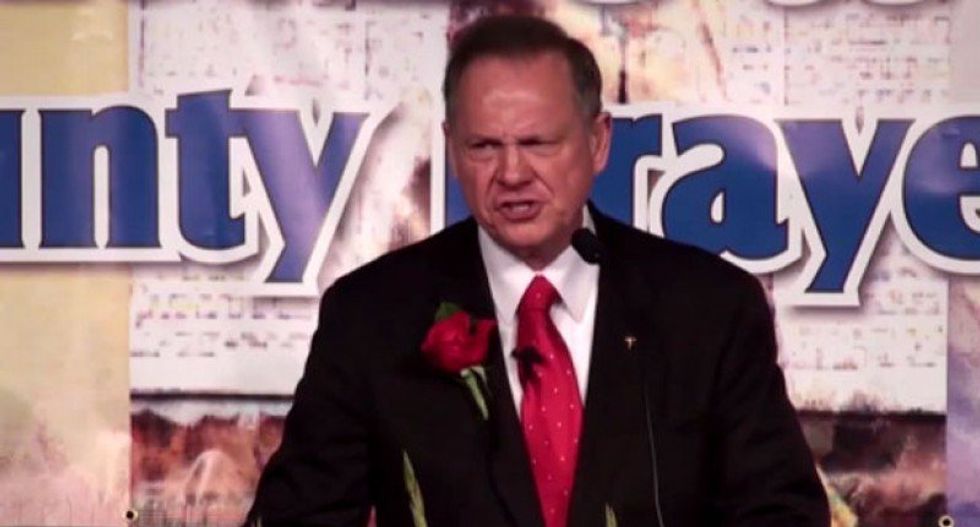 Alabama Media Group (AMG) -- which operates three newspapers and the AL.com website -- came out swinging against a lawsuit threat from ousted Alabama Chief Justice Roy Moore by rejecting a cease and desist order and all but daring the U.S. Senate candidate and accused child sex predator to sue them.

The Washington Post said Sunday night that Alabama Media Group (AMG) is rejecting a cease and desist letter from Moore and his attorneys.

“You have accused AL.com of making ‘false reports and/or careless reporting’ about multiple subjects related to your clients,” said a letter from AMG's attorney John Thompson of Lightfoot Franklin White LLC. “Your letter demands that AL.com retract and recant its prior stories and that it ‘cease and desist’ from any further reporting about your clients.”

“AL.com hereby rejects your demand,” the letter said. “You have not explained how anything that AL.com has reported is untrue, inaccurate or erroneous, nor do you provide any support for your position.”

AMG vice president for content Michelle Holmes told the Post's Erik Wemple that the demand from Moore's attorneys didn't specify which stories Moore, his wife Kayla and the Moore for Senate campaign believe to be specious.

“As the letter outlines, these demands appear to be a show more than they are a serious attempt to question what we believe to be fully legitimate, serious reporting,” Holmes said.

The Post noted that AMG operates Alabama's three largest newspapers, The Birmingham News, The Huntsville Times and Press-Register of Mobile in addition to AL.com.

“I think they recognize that the viewpoint of Alabamians is what matters most, and if they can silence us, they would love to do it," Holmes said.

"They’re not going to be able to do it,” she added.

In addition to refusing to comply with Moore's demand that AMG stop publishing stories about him, the company said they'd be happy to litigate the matter with Moore in a court of law and urged his operation to preserve all "materials, documents, writings, recordings, statements, notes, letters, journals, diaries, calendars, emails, videos, computers, cell phones, electronic data, and other information."

"Which is to say: Be careful what you wish for, Mr. Moore," wrote Wemple.

Read the full report and view a copy of AMG's letter here.