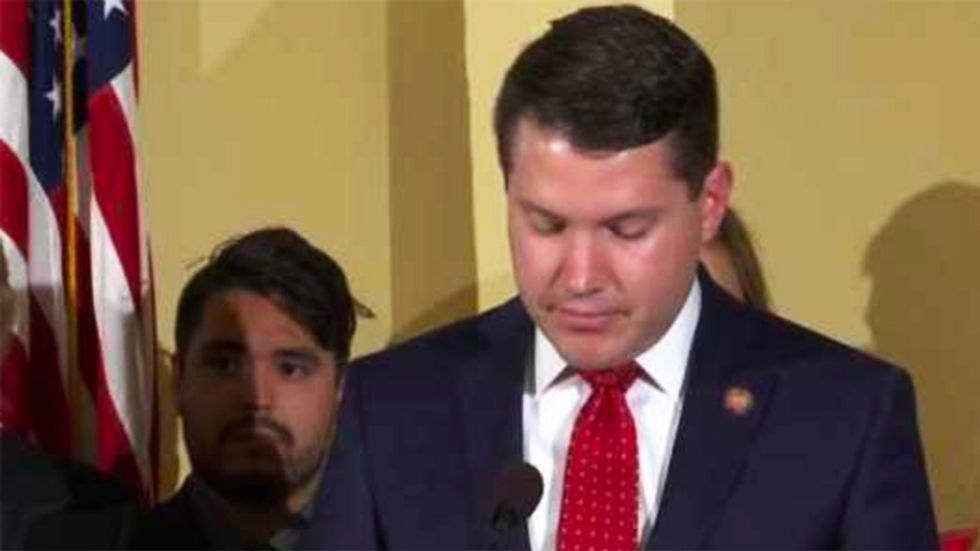 According to the Independent Journal Review, former Representative Wes Goodman (R) spent late evenings direct-messaging with other man while his wife slept, engaging in sex talk and offering to provide sexual services.

Goodman, a Christian advocate for "natural marriage," stepped down from the Ohio statehouse last week after he was accused of engaging in sexual acts with another man in his legislative office.

Since Goodman's resignation it has been reported faith-based Family Research Center head Tony Perkins knew that Goodman had sexually molested a teen at a D.C. hotel during a conference two years ago, but failed to go public even after Goodman was elected.

According to the latest report, there has been an avalanche of men -- many of them married to women -- who have come forward with text messages from Goodman flirting with them before offering to have sex with them

According to one source, who asked to remain anonymous, "He also asked if I would be coming up to DC in January for March for Life. He also repeatedly invited me up to Ohio so I could job shadow him and tour the Ohio Capital. Then in November 2016, one night, he started a conservation about how his wife was asleep and he was bored. I didn't reply for about 30 min after opening the Snapchat. Then, he sent me videos of him masturbating as well as d**k pics. He also sent another Snapchat asking how big my penis was. I immediately blocked him. He later [messaged] me on both Instagram and Facebook leading me to block him."

Oddly enough Goodman never attempted to hide his identity, using his full name which shows up in the screenshots of his texts.

Another man who heard from Goodman, described him as a "major creep" and said he considered outing the GOP lawmaker “for being a perverted weirdo," after receiving suggestive picture from Goodman.

According to a business owner who reached out to IJR, Goodman hit on over 50 percent of his staff.

Another source claimed Goodman used to brag about having sex with his fraternity brother when he was still in college.

“While on a vacation out west was forwarded incredibly bizarre screenshots from Wes — nothing graphic, but conversations where he talking about oral sex acts between he and his fraternity brothers," the anonymous source wrote. "The person who sent them knew he worked in politics at a higher level than they and thought he would have insight on how to handle it.”

You can read the whole report -- and marvel at screenshots of the graphic texts -- here.